Although this weekend may have been just a regular one for the Premier League, with fairly common occurrences taking place such as Latics losing, a much greater announcement was made that will surely bring great memories flooding back; that of Jimmy Bullard’s retirement.

In January 2003, a shaggy haired cheeky cockney known as Jimmy Bullard entered the JJB Stadium under Paul Jewell’s management. The up-and-coming central midfielder had joined from Peterborough for a £275,000 fee, which is the equivalent of a season ticket at the Emirates nowadays, and on that day, a Latics legend was born. His infectious personality soon endeared him to the faithful and he went on to make a record 123 consecutive appearances for Wigan as the club earned promotion to the Premier League and took it by storm in 2005. 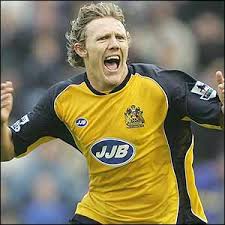 I’m sure everyone you raconteurs have a few anecdotes to share about our eccentric old midfield general, so if you’re up for a bit of nostalgia, read on.

Every dressing room has what they consider to be the joker in the pack, the one that’s a bit of a cocky bugger who likes to take the Mick, but I’d like to think Jimmy was more than just one of those attention seeking annoyances who generally gets up everybody’s noses. He was the joker. Although a very handy player in his prime too, I’m sure Jimmy’ll be remembered for his career of comical value more than anything.

Looking back, I’m not entirely sure where to begin, so I’ll just jump in there with an old classic which sums up the character he is.

Remember the Carling Cup semi-final first leg in 2006? Jimmy and the boys had shocked everyone to get that far, and then the lights went out when Arsenal came to town, typically. Instead of following the sensible example set by the other players and simply walk off the pitch, Jimmy decided to dribble past the Arsenal players and have a shot on goal, which spectacularly missed. I think he also tried to pull Freddie Ljungberg’s shorts down which I think only he could get away with.

In the same season, Everton visited the JJB in a fairly uneventful game which ended 1-1, the mass brawl that broke out during the game though wasn’t dull at all, with Duncan Ferguson and Jason Roberts both getting red cards (you wouldn’t mess with them, would you?) The former giving another legend (or otherwise?) Paul Scharner a ‘welcome to England’ punch in the stomach to earn his dismissal. Bullard however didn’t fancy his chances in a punch up against big Dunc, and instead humoured us all by looking up at the eight foot not-so-friendly giant with the stare a small child would give to Gary Glitter. He looked absolutely horrified. During the same game, a goalline scramble took place on the Everton line, and instead of trying to score, Jimmy just couldn’t resist leapfrogging over the pile of players that had assembled in the penalty area much like an easily amused kid.

Even after his departure from the JJB, Jimmy was up to his old tricks. When recording with Sky Sports when players were given a simple task of turning around and walking up to a camera, Jimmy found a way to entertain. The funniest part of the video is the great contrast between his antics of walking up to the camera with his shorts higher than Curt Kobain and the old model professional George Boateng, who needless to say, completed the task with a lot less fuss!

In 2010, Bullard featured in a hilarious advert for Wash & Go shampoo, which was only made funny by the man himself. The outtakes video is even funnier and if you have a spare minute, take a watch. Also whilst at Hull, the Eastlands celebration took place. Phil Brown’s infamous team talk on the pitch was thought to be the root of Hull’s demise the previous season until they got relegated in May 2010. Jimmy did his best to dispel the ‘ghost of Eastlands’ in the only way he knew how. After scoring a penalty to equalise, he gathered the players in a circle sat on the floor, and mimicked Brown’s rant by pointing and shouting at them. Even Phil Brown saw the funny side, but the interesting thing was, the Hull players had agreed to the celebration regardless of who scored the goal. Typically, it had to be Jimmy that did it, but I wonder if it would have been as effective if Paul McShane or George Boateng had scored the goal instead.

Another classic Bullard story comes from his Fulham days during a pre season tour of Germany. He managed to get the number of the then manager Chris Coleman’s room and everything he ordered, he put on Chris’ room. Come the end of their stay, Chris was left with a huge bill for a variety of Jimmy’s indulgences! He even paid for the drinks of the Real Madrid players they bumped into at the hotel too, which is quite outrageous if you ask me.

On the topic of Germany, there were even rumours of him playing for Germany in the 2006 World Cup whilst he was in his Latics pomp. He qualified through the birthplace of his grandmother and although it never actually materialised, it still made a sensational story. He did however, get an England call up when at Fulham, and although he never earned a cap, he must have brought something to the England camp as one of the few that didn’t earn over £100k a week or cheat on his teammate’s missus.

Personally, I was absolutely devastated when he left for a measly £2.5 million for reasons that still aren’t quite as clear. I’ve always followed his subsequent career moves and was also gutted to see him suffer for so long from injury after that horrific incident involving Scott Parker at St James’ Park. Things may not have worked out at Hull or indeed at Ipswich (although he did get the player of the year at the latter in 2011 despite playing only half a season) but he’s still a legend in the eyes of many. Despite what he’ll be known for, he was a bloody good player too and drove the Latics’ midfield from 2003 to his departure in 2006, scoring many spectacular goals too, the free kick against Newcastle and the left foot screamer against Arsenal in 2005-06 spring to mind.

I’m sure there are many classic Bullard moments that I’ve not mentioned and I’m sure you’ll bring them up in the forums but I just wanted to salute one of my favourite ever footballers, not only that played for Wigan, but have ever played. Jimmy always played the game with a smile on his face (except from when presented with Duncan Ferguson of course) and made people laugh no matter what he was doing. I don’t want to make it sound like he’s dead because he’s not, but his retirement is a loss to the game. I just hope that he returns one day soon as a manager, imagine him and Paolo Di Canio in opposite dugouts? It’ll be an episode of the Chuckle Brothers down on the touchline.

For those of you that want some videos, here are some links…