Watching Chelsea players at The Stadium of Light on Saturday was reminiscent of watching Wigan in 2006/07. No they aren’t embarking on an eight game losing run, but their blue kit with white sleeves threw me back to the days of Denny Landzaat, Andrew Webster and David Unsworth. I’ll let you work out who they actually were.

One thing that didn’t throw me back to the same era as the aforementioned heroes (or otherwise) was the performance of Manchester City.

There was a time when City were the only team ever in existence to regard Latics as a ‘bogey side’. We even managed to beat them 4-0 at the JJB in 2006 and completed the double with a winner from Caleb Folan at Eastlands. 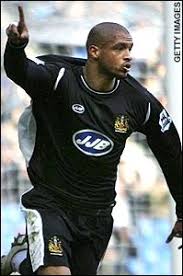 Now at the Etihad, you’d be forgiven for thinking that both clubs had new stadiums off the back of this. Therein lies the power of stadium naming rights I suppose.

Back to the present, Latics were staring down the barrel of the City gun, after thrashing Spurs 5-1 in their last outing, what hope did little Wigan have against Mancini’s men?

Well, not much as it turned out. Expert pundit Lee Dixon even said Martinez might have to sneak a few extra men on the pitch, he’s always got an ace up his sleeve then man.

City started the game by attacking in such numbers that made you wonder if they’d snuck an extra galactico on or not. With both full backs flying forward to supplement an already impressive attack, Wigan were pinned back in their own half.

The unluckiest striker on earth right now must be Edin Dzeko. Despite being in the form of his life and bagging four at White Hart Lane, the Bosnian found himself on the bench for the next game, much to the delight of the travelling support of course. The only shame was his replacement: Carlos Tevez.

Although Tevez himself wasn’t at his mercurial best, missing a penalty in the process, Sergio Aguero seemed to revel in his role as the main striker.

The inevitable happened after 13 minutes when Aguero opened the scoring with a less than emphatic finish, the ball rolled agonizingly past Al-Habsi to give City the lead nonetheless.

In a team which so much attacking talent, it was a struggle for the Wigan defenders to know who to watch closest. Silva and Johnson were both constant threats coming in off their respective flank and full backs Clichy and Richards rampaged into the space this movement created.

With so many chances created, Wigan can be reasonably happy with the final scoreline, a mere 3-0. Not much for a side that has conceded nine in the past.

It was nice to see that Aguero had realised his error in tradition and took the match ball home after scoring a hattrick, against Swansea he thought two was enough. Yet when you’re worth £38 million, I suppose that’s the respect you demand?

A player who’s lost a lot of respect from purists and of course Steve Bruce is his erratic striker Asamoah Gyan.

Gyan completed a sensational loan move to Al-Ain FC (Dubai for you football quiz amateurs) just hours before Sunderland’s match up with Chelsea.

After an unexpected move, Bruce stated that the Ghanaian hadn’t been himself for the past few months and was sent out on loan in order to find his head, and form, for next season.

Now though it appears that Bruce is resigned to losing the striker for good after a frank interview after Saturday’s match, which Sunderland lost 2-1.

They say that the root of all evil is money, and it certainly appears that Gyan’s move is totally money motivated. What was that Harrod’s quote again Brucey?

Sorry to sound bitter, but I don’t recall any typical fault with Harrad’s goods spontaneously moving despite swearing their allegiance just days earlier. Is that a bad analogy? I’ll move on…

If it’s any comfort for our old friend, last season Wayne Rooney was caught up in a fiasco which saw his loyalty to his club questioned and a rumoured transfer on the cards. He’s came back this season on fire, although he didn’t move to Dubai like a stereotypical money grabbing footballer, the similarities are still there.

Rooney and co’s latest victims were another of our old friends, this time from the Reebok.

The Manchester clubs’ explosive starts leave them at the top with 100% records, the last time United did the same was back in 2006/07. The nostalgi 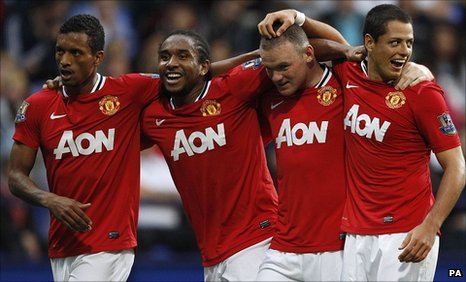 a this evening is frightening!

The last time City won their first four was probably back in the Stone Ages when their opponents included Caveman FC, more trivial knowledge for you quiz rookies there.

Like Aguero, Rooney earned the match ball with three decisive finishes that left Jaaskelainen with no chance in the Wanderers’ goal. No Bolton fans, you can’t have Ali back.

Unlike Aguero however, Rooney’s strike partner Hernandez helped himself to two goals to make it 5-0 to the Red Devils. The only blemish on an otherwise faultless performance was the loss of Tom Cleverley to injury. No United fans, you can’t have Hargreaves back.

Young Tom is the latest to feel the wrath of Kevin Davies. Although not renowned for injuring players due to malicious challenges (not much anyway) Davies’ physical side to the game doesn’t always endear him to opposition fans and this won’t have done his fan club many favours.

Ferguson confirmed to that Cleverley will be out for around a month with the injury sustained, I for one wish him a fast recovery.

Before I leave you, I’m sure you’ll be delighted to see my new innovative feature…

Boselli Watch: Just to check up on his progress to make sure he hasn’t turned into Messi over night, I’ll be giving you updates on the striker who is ready to hit the Premier league by storm next August… maybe. Anyway, one goal in four games back at Estudiantes gives him a better strike rate than former Latics strikers Julius Agahowa, Caleb Folan, Lee McCulloch, David Graham and even Emile Heskey, amongst others.

Graeme Jones of the Week: I’m struggling to find this week’s hero, Gustavo Poyet for Brighton’s impressive start to Championship life is how desperate I am.

Graeme Souness of the Week: Michael Vorm for gifting Andrei Arshavin the winner with a comical blunder, Arsenal needed it too. Arsenal 1-0 Swansea

Quote of the Week: There are two that stand out this week. Firstly, another gem from the Soccer Saturday panel and Paul Merson: “Stoke can challenge the top six this season.” Elsewhere, there’s more crazy optimism from Steve Kean: “We (Blackburn) are capable of a top ten finish this season.”