Spy shots from our one legged roving reporter 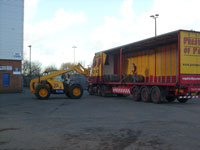 Nothing escapes the sharp eye (and camera) of Dave our one legged roving Wigan Athletic fan, here we have the latest photo evidence of what’s going on at the DW Stadium.

For those who saw yesterday’s finding, you will already know that over 250 tons of fibre sand has been laid down on the DW surface, the largest amount has being put in front of the Springfield Stand due to subsidence. This compares to just 220 tons the last time it was reliad just last year and 200 tons the year before, there is no telling when the subsidence will slow or stop.

It was commented yesterday that the area in front of the tunnel has dropped nearly 6 inches, and has a noticeable drop every two years. This is when the ground staff have to pack it up so that it looks as level as is possible, the problem being the undersoil heating is dropping further and further away from the surface and therefore will soon not be effective in that area.

Anyway back to what our spy has taken pictures of, it looks like the turf has arrived bang on time and the lads are looking to have the pitch laid and bedding by Tuesday evening. As we mentioned yesterday, the pitch doesn’t really need that much time to settle, it is totally feasible that we could play on it on Wednesday, but luckily it will have some time to itself before 25 men start running about on it.