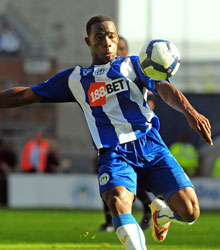 Maynor Figueroa has answered Steve Bruce’s harassment by saying “I am staying at Wigan Athletic” and signed a new improved deal at Latics to prove it.

After months of hounding by Sunderland and Steve Bruce, Maynor Figueroa has shut our ex-manager up and quashed all the agent driven rumours about him being unhappy at Wigan by signing a new contract that will see him at Latics until 2012. Old Brucey hasn’t managed to snap anything up in the Harods OR Tesco sale yet, what must he be thinking now.

The Club announcement is as follows:

Wigan Athletic are delighted to confirm that Honduras international Maynor Figueroa (pictured right: signing with Chief Executive Brenda Spencer) has penned an improved contract at the club this afternoon, putting an end to all the speculation surrounding his possible departure this January.

The hugely talented defender has been the subject of vicious and potentially damaging rumours over the past few days and Latics manager Roberto Martinez is delighted that the club have been able to react in such a strong manner.

“Maynor is a top professional,” says Martinez, “undoubtedly one of the best I have worked with in my time in the game and I am very happy that we have been able to reward him in this manner and put an end to all the silliness surrounding him in recent weeks.

“I have talked to Maynor at length, as a fellow Spanish speaker it helps that we can communicate very clearly with one another. He has never spoken to me about wanting to leave the club. He is settled here and now just wants to focus on doing well for us.

“I said all along that if we decide to sell any of our most consistent performers, it will be only when the time is right for Wigan Athletic, with that money reinvested in order to move the club to the next level.

Figueroa himself said: “I am glad all the talk is over now and I can concentrate 100% on playing football and doing well for Wigan Athletic.”

Figueroa arrived at Wigan in December 2007 from Deportivo Olimpia, initially on loan, and during the course of 2008-09, became the first Wigan Athletic player to start every match of a Barclays Premier League season.

His spectacular 67 yard plus strike against Stoke City recently won BBC Match of The Day’s December Goal of The Month award, increasing his reputation further as one of the best players in his position in the Barclays Premier League.