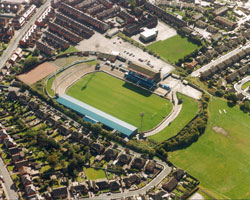 4 Years after Dave Whelan brought the three amigos over from Spain, a new Stadium was built and the class of ’99 were the last team to play at Springfield Park, here we see how Wigan Athletic Supporters Club Annual Dinner 2014, will bring together some of the most iconic names to wear a Wigan Athletic shirt.

A great night is in store as Wigan Athletic Supporters Club brings together the team that played Chesterfield in the last ever League game at Springfield Park on 8th April 1999.
We will be holding the Event in the South Stand Suite of the DW Stadium on Thursday 17th April 2014, it is Bank holiday next day when we will be playing Reading at home.

There will be a fantastic 2 course meal put on, Cottage Pie with all the trimmings (plus a vegetarian option) rounded off with desert. The players and Manager will then be introduced and they will share their memories of the last game, Springfield Park and the 1999 season.

There will be some fantastic prizes to be won on the night.

Tickets are priced at £12.50 and can be bought via the Supporters Club website by clicking here, or in person in the South Stand Suite before and after the Leeds United and Millwall games.