At long last it seems that Wigan Athletic now have a paper that has done a bit of genuine research into Latics crowds and have realised that we are a success story, not a play thing that shouldn’t be gracing the higher echolons of the Football League, well done Michael Walker.

It is about time the lazy hacks were put in their place and thanks to Michael Warner of the Daily mail it looks like a new and more educated and factual slant on the ‘attendance’ debarcle has been brought to the forefront.

When I spoke to Michael yesterday I thought it was going to be another article that totally ignored the information that I would give him, but to give him his due he at last put across some of the underlying factors that have hampered the crowds at Latics, whilst acknowledging the meteoric growth we have actually had in the last 10 – 15 years.

Here is his article which will be in tomorrow’s Dail Mail:

So what is the point of Wigan? Tiny crowds, a small town surrounded by Manchester City, United and Liverpool. Sportsmail has the answer…

Wigan Athletic’s attendances have trebled in seven years from just under 6,000 to just over 18,000: any of the frequent discussions regarding the crowds at the DW Stadium must recognise that fact and yet almost every discussion about those crowds ignores it.

Wigan received another blizzard of bad publicity last Saturday when a paltry 5,335 paid to see the FA Cup tie with Hull City. This was fewer than saw Wigan beat Northampton Town in the final home game of season 2001-02, when the Latics finished 10th in England’s third tier.

That is what many think of Wigan: third tier. Yet last Saturday there were mitigating circumstances: the weather, the 5-0 hammering at Manchester United three days earlier, a less-than attractive Premier League opponent in Hull and the fact that there is an FA rule that forbids clubs to charge less than £15 per ticket for Cup ties unless both agree.

Deserted: Wigan’s FA Cup tie against Hull was played out against the backdrop of empty seats
Wigan Athletic were hardly proud of the attendance but they would like some perspective, geographical and historical, when the club is talked about. ‘Look where we’ve come from,’ says the club’s commercial manager Paul Hunt.

‘We were only elected to the Football League in 1978. We think our progress is pretty good.’

Jason Taylor, who runs a Wigan fans’ website, agrees: ‘Fifteen years ago we had 1,800, now we have 18,000 – that’s a success story. ‘The critics don’t look at our history. We are 100 years behind Blackburn, Burnley and Bolton. They also don’t look at where we are. We are in between those three and Manchester and Liverpool. When you think about it, it’s a miracle that we get 18,000.’

The miracle of Wigan. It took some believing as row upon row of empty seats were photographed during the Hull game.

It reinforced the idea of Wigan as an artificial club whose rise has been based on owner Dave Whelan’s wealth every bit as much as Chelsea’s trophies are due to Roman Abramovich’s wallet.
There is no doubt that Whelan’s money helped fuel the wage bill as former manager Paul Jewell led the club out of the old Division Two and then out of the Championship.

Players of the cost and calibre of Nathan Ellington and Jason Roberts were bought as Wigan gathered momentum.

Later Emile Heskey would cost £5.5million from Birmingham. It’s not Real Madrid’s budget, though. Jewell received much deserved praise then – and for getting Wigan to 10th in that first Premier League season – but feels now that the novelty factor has worn off, which contributes to the dissatisfaction there is about Wigan.

Meteoric rise: Wigan were only elected to the Football League in 1978. He said ‘We climbed mountains to get to the Premier League and to get to the League Cup final, and we got the pats on the back. But people thought it’d be a fleeting visit from Wigan. They expected Wigan to go away. But they haven’t.’ Jewell says it is also forgotten that Wigan is a small town. Where Wigan begins and Bolton ends is one thing.

Another is that as Taylor points out, migration from Merseyside in the 1960s and 1970s means that ‘the west of Wigan is populated by Scousers’. That segment of the population has retained its affection for Liverpool and Everton, while Manchesters United and City are 19 miles away. Wigan is hemmed in. 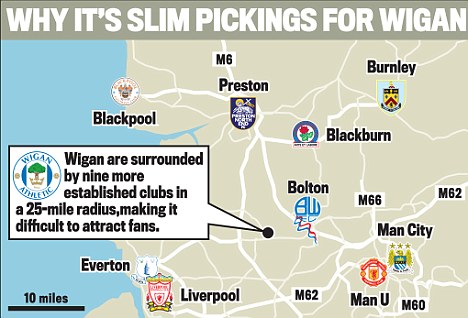 Then there is the rugby league club. It and George Orwell made Wigan famous. Central Park once held 47,000 for a game but by the time of its demise in 1999 the capacity was 18,000. Now Wigan Warriors attract an average of 14,000. ‘Wigan Warriors are not an issue,’ says Hunt. ‘There is a crossover in support and I view it a very positive rivalry that should inspire each other. It is not an issue in the way that Liverpool, Everton, City and United are.’

‘Family club’: Martinez says Wigan are making great progress Hunt adds that the youth of the club leaves no generational base to fall back on, unlike an historic club like Bolton (average attendance this season 21,400). But Wigan have worked hard on this. Not only is their most expensive adult season ticket £295, they have targeted schools with success.

Manager Roberto Martinez said: ‘In terms of the future we have the highest number of youngsters as season tickets holder in the Premier League. I think it is about 20 per cent of Wigan’s population at under 16 are season ticket holders, so there are many, many positive signs.’

Martinez was a player at Wigan and knew what the old Springfield Park was like. ‘We have trebled our crowds but never lost our family feel,’ Martinez adds. ‘If I am not wrong we have 11,000 season ticket holders, which is a seventh of Wigan’s population. If other football clubs had that ratio, their grounds would not be big enough. ‘From the inside, we know that where we were 10 years ago to where we are now, it’s a great achievement.’