The diary of a sixteen year old Wigan Athletic fan 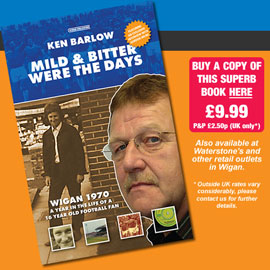 The first book signing opportunity for MILD & BITTER WERE THE DAYS BY KEN BARLOW’ will be this weekend in Waterstones in Wigan.

Do you remember being sixteen? Learning to love music and girls. Receiving painful knock backs from girls. Lying in bed till dinner time. Learning to love your local, non-league football club.
Ken Barlow’s – no not that one – fabulous book ‘Mild & Bitter Were The Days’ captures all these emotions and much much more. Quite why he decided to keep a diary whilst growing up in Wigan in 1970 even Ken doesn’t know but cross Adrian Mole with Non League football and you’ll get a pretty good idea of the content.
As Ken describes:
It was Wigan 1970 and terrace violence was beginning to dominate football, even non-league Wigan Athletic had their ‘boot-boys’.
Elsewhere, Led Zeppelin and Jethro Tull were breaking new ground in rock music. Meanwhile Ken remained perplexed by the fairer sex leading him to conclude that , “…life wur pot”
But this book is about so much more than that. It’s about friendships and relationship and knockbacks and wondering just what life has in store. Football is the underlying passion and of course Wigan Athletic were a pretty successful side in non-league and cup giant killing circles during this era
The author himself will be making an appearance on Saturday 12th September at Waterstones, Grand Arcade, Wigan where you can purchase a signed copy of his book and meet the author for a mere £9.99. At twelve noon, there will be a half time break and fresh off the bench, a certain Dave Whelan is expected to arrive signing copies of his new autobiography ‘Playing To Win’. Two very different books, yet both are a must for any true fan epitomising in detail both the past and present of Wigan Athletic Football Club
Ken Barlow will also be making a further appearance at the Supporters’ Club venue before a future home game (probably Chelsea on the 26th) or you can buy from Waterstones, the Brickmakers Arms’ or can be bought online at http://www.mildandbitter.co.uk/
A MUST FOR EVERY WIGAN ATHLETIC FAN WHO HAS EVER BEEN SIXTEEN….OR SOON WILL BE…OR IS SIXTEEN…YOU GET THE PICTURE
E-mail for more info: info@mildandbitter.co.uk
Website: http://www.mildandbitter.co.uk/