The DW Stadium pitch, will this be the last relay? 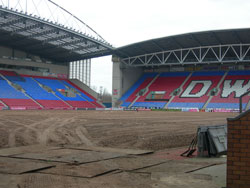 I had a walk down to the stadium whilst the latest relay was being done, mainly to get a sneaky photo and obviously to see what the latest info was. I got talking to someone there, whilst being shepherded away, and they went through the process of what goes into relaying modern football pitches.

As is common knowledge, the pitches these days are not just grass but a complex weave of fibres that resemble horse hair and a top grade grass. When laid, the pitch can be used immediately due to a bedding agent of sand, some more of this fibre and a couple of other ingredients that I fazed out and didn’t register. This bedding will be down by the close of play Sunday ready for the turf to be laid on Monday.

This all sounds quite straight forward and is to an extent, the pitch rests about 9 inches above the under soil heating system and after the pitch is laid nature should take over. The grounds men just need to look after it, water it, cover and heat when needed, or so you would think.

So why is it that the pitch is so bad at the DW Stadium? Is it the severe weather conditions that have wrecked it? Is it being relaid properly? Are the ground staff to blame? Is it the rugby or football’s fault? Is it because of the location of the stadium? Is it the type of drainage at the DW that is at fault?

Playing football on the pitch in all weather won’t damage a well maintained pitch; there are plenty of examples of decent playing surfaces around the country to prove this fact. I know it isn’t what some Latics fans want to hear, but neither is the rugby team at fault either.

The severe weather conditions could have hampered the undersoil heating system and did, but the actual playing surface shouldn’t be affected by it. Again there are plenty of other pitches that are holding up very well despite the recent cold spell.

Has the pitch been relaid properly over the last few years, again it is a yes, the company employed to relay the pitch has done everything they were asked to do, the type of pitch is a tech system which combines grass with fibre to give what should be an excellent all round playing surface.

The location of the stadium is on marshland that also has an extensive sewage tank sytem still underneath it, the tanks weren’t removed when the initial build was done and it would be too costly and time consuming to do it now.

When the first build went ahead a state of the art pitch was installed, but unfortunately the filtration system was vetoed at the last minute, probably due to the cost and so the grass deteriorated quite quickly. With the amount of new pitches since, maybe it would have been better to install it.

The system that should have been put in place was a similar one to that at the Emirates where an air flow is created under the pitch. In wet weather the airflow sucks out the moisture whilst in summer it blows air into the grass bed to improve the growth.

As I mentioned earlier, there is a huge sewage problem deep under the plot where the stadium is built which produces quite a bit of methane amongst other gases. What seems to be happening is the methane is seeping through the ground and killing of these fibres that keep the pitch knitted together.

So basically it looks as though the problem will be around for as long as these gases and chemicals exist deep below the pitch and so next year we will probably see the same happen again and will see it happen every year until the underlying problems are rectified.