Warning: This week’s Weekend Review contains plenty of tongue in cheek Grand National references for which I apologise for in advance.

As the Premier League reaches its final straight, there’s plenty more fences left to jump for teams at both ends of the table.

Chelsea weren’t at the races and had to rely on a dubious goal from winger Florent Malouda, and it was a scrappy one at that. Despite this, ugly football wasn’t the order of the day as there wasn’t too many hoofs.

Latics knew that it was ‘Comply or Die’ on Saturday which led to a determined ‘State of Play’.

In all seriousness, the fight that Martinez’s side have been criticised for in the past, seems to be more evident and because of this, our lack of genuine quality wasn’t exploited too much as we fought hard to stay in the game.

Until late on, it looked like Wigan would gain the point we deserved. If Charles N’Zogbia hadn’t been flagged off side, wrongly in my view, who knows what the outcome of that early one on one with Cech would have been?

Despite the increase in desire, Martinez knows he ‘Can’t Buy Time’ and with just six games left, the major need for improvement is in the final third.

Hugo was his usual lethargic self, and I’m now debating whether he’s more or less hard working than Jordi Gomez. His lack of movement is startling and really can’t provide too much of a threat for centre halves.

His tally of seven goals this season is quite poor to be fair, even Marcus Bent managed that total.

You could point to his lack of support as a lone striker, that would be fair. Yet I still think if he’s playing up there every game, with the quality of service in N’Zogbia and Cleverley, he should only need some movement to take him away from the defenders to create some space for the talented pair to pass into.

Hopefully Roberto sees this and put the more energetic Connor Sammon up top, this is almost a unanimous view in the stands and although that doesn’t automatically make it a correct one, it’s definitely worth a try. Especially against Blackpool whose open style of play is very vulnerable to pace on the counter in the likes of N’Zogbia, Moses, Sammon and Cleverley.

In the wake of this potential six pointer, it’s great to see that we’ve sold out our away allocation for the first time in a long while; and also James McCarthy’s attempt of rallying the troops with his inspiring words.

“You can’t put into words how big this weekend’s match against Blackpool is going to be, what a game that’s going to be.” He sounds like he’s ready for battle, and against Charlie Adam, he might need to be. Enjoy it lads, it should be a cracker.

I feel it’s been too long since the last Grand National reference, so keep your eyes peeled as we move on to how our relegation rivals did this weekend.

Blackburn weren’t left saying ‘Big Fella Thanks’ to their lanky striker Roque Santa Cruz, as he went another game without scoring at home to Birmingham.

Luckily for them, Junior Hoilett did score in response to Lee Bowyer’s opener to secure a 1-1 draw. This was probably the best result for us, as it keeps them both in close proximity of the bottom three and neither are out of jail. I fear for both and with just three or four sudden defeats, could be right in the thick of the war zone.

West Brom were involved in a thriller at the Stadium of Light where they fought back from 1-0 and 2-1 down to steal a 3-2 win against the odds. With Paul Scharner (remember him?) bagging the winner late on. The Baggies look safe on 39 points, but when it comes to luck, ‘Don’t Push It’ Albion fans, teams have gone down with less in the past.

Sunderland themselves are in a bit of bother as a fan has crazily decided to sue them for being knocked out by a stray ball hit whilst he was watching a training session in 2009.

Erratic striker Djibril Cisse was the culprit, smashing a shot square in the fan’s face. His accuracy on the pitch wasn’t too great that season either, as he ended up with just nine League goals and a plane back home to France.

Elsewhere, Everton and even our very own rivals from Horwich did us a favour as both won 3-0 against teams down there, Wolves and West Ham respectively.

Bolton are feeling the benefits of having a prolific striker in loan star Daniel Sturridge. The youngster is reveling next to Kevin Davies and has even forced the startlet that is Johan Elmander to move out to the wing.

Sturridge, a misfit at Chelsea, has been a breath of fresh air at the Reebok with his constant running and dribbling skills. He just never seems to stop and is always a threat from open play. I think I can get away with giving a Bolton play praise if he’s technically not owned by them can’t I? Ali Al-Habsi is the only other exception of course.

Everton on the other hand, short on numbers due to injuries and having lost Steven Pienaar in January, needed their fringe players to step up to the plate at Molineaux.

Thankfully, they did and the likes of Jermain Beckford, Diniyar Bilyaletdinov, Leon Osman and Phil Neville were all drafted in and whilst normally not considered key players, played a vital role in the absence of Arteta, Cahill and Fellaini.

Three of the aforementioned scored, whilst Leon Osman was everywhere, making a crucial block at the back and a great cross up top.

This forced squad rotation policy has given Everton a new lease of life and fresh legs in the players determined to take their chance. I remember Paul Jewell doing a similar thing during the 2004/05 run in where he controversially dropped Baines, Teale and Ellington in favour of the fresher and hungrier McMillan, Jarrett and Ormerod.

Considering we went up, the policy seemed to work, so can we expect to see the likes of De Ridder, Gomez and Lopez recalled for the final few games?

As bad ideas go, I think that one is up there. 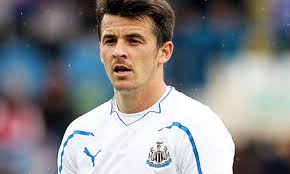 I couldn’t finish without mentioning the insane comments made by Joey Barton in midweek. Just as he was getting ignored by the press due to actually concentrating on his football, he decided to go all ‘Charlie Big Balls’ with some outrageous comments.

In a what can best be described as ‘Frank’ interview, he labelled himself as the best English midfielder. Stating that Lampard is ‘on the way down’; Gerrard is ‘injured alot’; and Wilshere ‘isn’t bad’.

Despite his pure cheek, I couldn’t help but agree with him about Gareth Barry though, a teacher’s pet in comparison to Barton the class clown.

Our infamous friend Joey stated “Barry’s got a very good agent” and “He’s like the guy who sits in the front row and listens to the teacher. I certainly don’t lose any sleep when I play against him.”

If you were surprised by his unbelievable ability to put his tongue firmly in his cheek and head deep in Miracle Grow, you’ll be happy to read his comments on former team mate Ousmane Dabo. You know, the one he savagely attacked?

“The truth is that he started the fight and I finished it. Frankly, Ousmane is a little pussy.”

Save of the Weekend: Asmir Begovic to deny Tom Huddlestone, Spurs 3-2 Stoke

Blunder of the Weekend: Has to be the failure to spot Torres’ blatant push on Ali, Chelsea 1-0 Wigan

This Week’s Teaser: If you put the surnames of every Football League player Latics have ever had in alphabetical order, who could be first?