The Promotion Team of 2005, Where Are They Now?

The Latics team of 2004/05 were undoubtedly legendary, with Paul Jewell leading them to the top flight for the first time. Yet I was wandering, where are these once majestic heroes languishing now, and how much of their talent still remains?

Some have had success stories, yet most have gone downhill. After searching the internet I found some had gone into coaching; some returned to where it all began for them; some are scraping the barrel in the sewers of football and the odd one is still in the Premier League, yet it’s lonely at the top…

1. John Filan – Wigan’s ever reliable Aussie number one can now be found enjoying retirement in his home land down under. Filan had to share the keeper’s spot with new arrival Mike Pollitt in 2006 and later Chris Kirkland in the infamous ‘second season’. His penalty save in the 1-0 win vs Newcastle to deny Nobby Solano will always be looked back on fondly by Tics and is a definite career highlight in the survival run in.

19. Nicky Eaden – Can be best described as a ‘steady Eddie’ at right back, left Wigan in the summer immediately after promotion to join Nottingham Forest. He made just 28 appearances for the club before moving on to Lincoln before deteriorating and ending up in the non-League with Halesowen and Solihull before a spell at Kettering. He followed his manager Mark Cooper to Peterborough as his assistant before things turned sour and Eaden left when Cooper was sacked soon after arrival.

4. Matt Jackson – Club captain that lead the side to promotion in 2005 stayed for two Premier League seasons despite not being a regular due to the arrivals of Arjan De Zeeuw, Stephane Henchoz, ‘one size’ Fitz Hall and the likes. He rejected a one year deal in 2007 and joined Watford, a short loan spell at Blackpool signalled the end for Jacko in 2008. He has since worked on his coaching badges at first club Luton in the Blue Square Bet Premier and makes regular appearances as a pundit on Five Live. Alan Hansen, watch your back.

6. Ian Breckin – The ever dependable Ian Breckin surprisingly left Wigan with Nicky Eaden to Forest in the summer of 2005, and was apparently devastated not to see out the Wigan dream in the Premier League. Breckin is now back at his first club Chesterfield and remains there as captain. 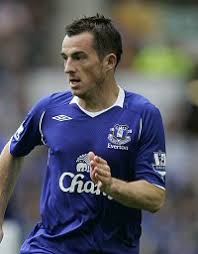 26. Leighton Baines – You may have spotted a recurring theme of players either sinking into the lower leagues or hanging up their boots since the promotion campaign, but not Bainesy. Of course, he can be found on Match of the Day week in week out and has a growing reputation as England’s best left back besides Ashley Cole. Leighton left Wigan in 2007 to join boy hood heroes Everton for £6million, he had previously helped Wigan’s survival course with spectacular goals against Man Utd and Spurs. Renowned for his marauding runs from full back and pinpoint crosses, he made his England debut last year vs Egypt; and if he has any advantage over Cole, it’s at least he doesn’t shoot teenagers with air rifles.

20. Gary Teale – Can be best compared to Aaron Lennon when at his best in a Wigan shirt (only by his mother of course). Yet Teale’s contribution to the promotion push can’t be underestimated as he assisted many of the front two’s goals. He left Wigan in January 2007 to join Derby, and has the unwanted fact of having appeared in the disastrous relegation side of 2008, where his team managed a pathetic 11 points. He has had loan spells at Plymouth and Barnsley before joining Sheffield Wednesday in the summer, who are currently mid table in League One.

21. Jimmy Bullard – The one and only, was a key player in the 2006 season where we managed a top 10 finish, scoring spectacular goals against Newcastle and Aston Villa that stand out. He disappointed many a Latics fan by joining Fulham for £2.5 million at the end of that season, for reasons only Vat knows it would seem. His horrific injury sustained under a Scott Parker challenge left him out of action for over a year, he returned to aid Fulham to a remarkable survival mission the season later. After a largely unsuccessful spell at Hull, he’s now reunited with then Latics boss Paul Jewell at Ipswich, as the pair look to do damage to the Championship once again.

11. Graham Kavanagh – Like Bullard, Kav was instrumental during the 2006 season and his grit and determination was vital in many games. Also like Jimmy, he left during the summer of 2006 to join Sunderland following the arrival of Denny Landzaat. He was only a fringe player for Roy Keane’s side and after a short spell at Sheffield Wednesday, he is now player coach at Carlisle United and his hair is as grey as ever.

10. Lee McCulloch – Left Wigan after triumphing at the ‘Battle of Bramhall’ which saw Latics dramatically stay up on the final day, despite Super Lee’s red card. He was also infamous for his punch of Blades’ centre half Chris Morgan at the JJB in December 2006, which gave many people great satisfaction to watch. Used as a left winger under Jewell, he revolutionised that position as he was effectively a target man on the wing and if all else failed, we just smacked it to him and hoped he would head it in from out wide. He earned a dream move to Rangers in 2007 where he is now used as a holding midfield player.

30. Jason Roberts – Part of the deadly duo up top where he combined with Ellington with devastating effect, scoring 21 goals on the way to promotion, he also played half of the deciding game against Reading with a suspected broken leg. Now that’s commitment! His eight goals were vital in 2006 as he struck up a partnership with Henri Camara which yielded 20 goals, he was replaced by Emile Heskey in 2006 and is still at Blackburn. He’s far from prolific yet his attitude can never be questioned and still doesn’t celebrate when he scores against us, and was even linked with a return in January. 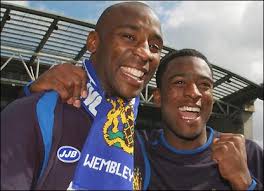 9. Nathan Ellington – The other half of the strike force was the Duke who finished as top scorer with 24 goals, just to illustrate his fall from grace, he’s only scored 30 League goals since that season. This story of footballing euthanasia was carried out by Ellington and his money grabbing agent as he joined West Brom in 2006. Despite claiming West Brom were ‘a level up from Wigan’, The Baggies went down and Wigan survived and it all went downhill from there. He joined Watford in 2007 for £3.3 million and has only managed five goals for the club he’s still technically under the ownership of. He joined up with Paul Jewell at Derby for a loan spell in 2008/09, where he was just as unsuccessful and then went out to Greece for a year. He has surely hit rock bottom on loan at Preston now hasn’t he?

Others from the squad that deserve a mention are:

3. Steve McMillan – ‘Sick note’ retired from the game due to injury – typically – in February 2007 after a long battle against repeated injuries. He was a solid left back in his day who had lost his place to Leighton Baines by the time he hung up his boots, definitely a shame to see such potential not fulfilled due to no fault of his own.

7. David Graham – Wigan thought Graham was the perfect replacement for Andy Liddell when beating Leeds to the signature of the £215,000 marksman from Torquay. His performances for the Latics were more like another comedy character from Torquay as he managed just one League goal and was out of the team due to Ellington and Roberts’ great form. He returned to Fawlty Towers after spells at Huddersfield and Bradford. It seemed to go downhill even further from here and the once promising fox in the box has faded away into non-league darkness with Hucknall, Sheffield and Ilkeston.

8. Neil Roberts – Unlike his namesake Jason, Neil wasn’t such a success in 2005 and even left the club in January after a spell at the JJB where his work rate endeared him to the faithful. His ‘never say die’ attitude was brilliant to see and would be a real breath of fresh air even now after seeing the likes of Mido and Gomez lethargically plodding across the pitch in recent years. Roberts is now enjoying the riches at Manchester City as a project manager my sources inform me, he went back to his first club Wrexham before retiring at Rhyl following a prolific season in 2009.

14. Alan Mahon – Chipped in with some vital goals in 2004/05 and like Roberts, is now at his first club Tranmere after a long career. The 2005 promotion was a personal highlight for him, besides playing for Sporting Lisbon against Real Madrid that is. Often accused of being the shy retiring type, the best anecdote I’ve heard involving Mahon was when Jimmy Bullard came to training with his new pride and joy signed ball. Who signed the ball slipped my mind, yet Mahon convinced Jimmy to throw it to him promising he’d nod it back gently, but he smashed the ball high over a fence into a puddle of mud, leaving poor Jimmy heartbroken.

17. Per Frandsen – Was on terrific form following a short move from Bolton, which fans seemed to not mind too much. He was dominating midfields alongside Bullard as Wigan steamrollered their way through the Championship. Yet a serious injury ended his career, unlike McMillan though, he’d seen his prime come and go so this injury at 35 ended his footballing career not too long before its sell by date anyway. He can now be found in Denmark at the rich and famous HB Joge as assistant manager.

18. Jason Jarrett – Can be best described as a bit part player in 2004/05, yet his Man of the Match display against Reading will have made his Latics career slightly memorable. Since his departure in 2005, Jarrett has become a journeyman playing for Norwich, Plymouth, Preston, Hull, Leicester, QPR, Oldham, Brighton, Port Vale and Oldham again but is now a free agent. Phew.

16. Brett Ormerod – Some forget that Ormerod actually featured for Wigan on loan in the promotion run in, even replacing the ‘jaded’ Ellington as Jewell made use of Brett, McMillan and Jarrett to bring some fresh legs during the final straight. Brett may have even played in the crunch game against Reading had he not been recalled by Southampton. His biggest contribution was scoring two goals in the 2-0 win against Leicester at the Walkers, of course he’s now back at Blackpool and occasionally plays in the Premier League, even notching against Spurs not so long back. 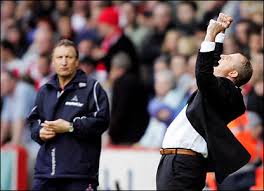 And Jewell? Well his Ipswich side must be contenders for promotion next season surely? His expertise will be vital for them, and it’s ironic that he leads Ipswich as they were our biggest threat to promotion in 2005 and nearly pipped us to the post. His achievements here though will never be forgotten and is widely regarded as Wigan’s greatest ever manager.