The Pulsating Afternoon That Ensured Justice

The date is April 28th 2007, Wigan Athletic are without a win in six games and are heading towards the Premier League trapdoor at rapid speed. West Ham, deep in relegation trouble, are the visitors to the JJB. This presented Wigan with an invaluable opportunity to send West Ham deeper into the bottom three and all but confirm our own survival. Wigan lost that day. Three zip. Thanks to a gutless performance against a team that wanted to win more than we did. West Ham were on the up at the right time, Wigan on the other hand, managed to lose the next week at home to Middlesbrough 1-0. Meaning only a win on the final day would keep the Latics save. Whilst we were celebrating that momentous win at Bramhall Lane on that rainy, nerve shredding final day of a pulsating season. Sheffield United were mourning their relegation after just a season in the top flight. Against every theory of justice, which ever way you look at it, West Ham had cheated and had stayed up. Saved by a corrupt Trevor Brooking who denied any points being deducted, West Ham continued to play, and win. Typically, Bolton lost 3-1 at Upton Park; then Champions Man Utd fielded a weakened team at Old Trafford a week later. West Ham won 1-0 to stay up. The match winner on each occasion? Carlos Tevez. 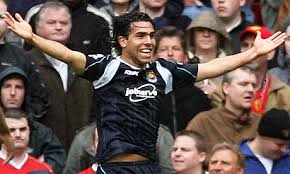 Needless to say, four years on, justice has been done. West Ham’s survival chances looked slimmer than Robert Green’s chances of another England cap at best before kick off. Requiring two wins from their two final games and a combination of other results to occur for safety to be assured. With their 4,500 strong following though, and ‘I’m forever blowing bubbles’ ringing around the DW, they pushed on, clinging to every last drop of determination they had left in the tank. Twelve minutes in, Demba Ba headed past Ali Al-Habsi for 1-0. Fourteen minutes later, it was Demba Ba again who rose highest at the far post to double the Hammers’ lead. 2-0. Latics were disconsolate, poor defending had cost them dear after a promising start. Fans were leaving, West Ham were cheering. They genuinely thought they were staying up. In hindsight, how flippin’ stupid were they? Wigan, inspired by Martinez at half time and following the introductions of energetic Connor Sammon and Victor Moses, attacked with nothing to lose. An early goal was necessary to lift the flat crowd and get the atmosphere bouncing again. Who better to seize initiative in such a moment, than Charles N’Zogbia? Having been contained rather well by on loan full back Wayne Bridge in the first half, Charles tore him to shreds in the second. Attacking the Hammers’ defence from all angles and drawing a clumsy foul from James Tomkins on the edge of the box on 57 minutes. Determined to make the cheats, sorry West Ham, pay; Charlie picked himself up and curled an unstoppable effort into the top corner. 2-1, and we were back in it. The mood had changed suddenly, Latics were on the attack and looking dangerous. West Ham were on the back foot and looking shaky, could we find those vital two goals?

‘Feed the fish and he will score’ was the cry before half time from the Latics faithful, and Wigan duly obliged. Mohamed Diame won possession in midfield and drove forwards, some ricochets took the ball into Ben Watson’s path and the midfielder fed a through ball into the path of Sammon. Decisively, Sammon cut inside from the left channel onto his right foot, past Danny Gabbidon, he then fired a beautiful finish past Rob Green to send the Wigan fans into delirium. Two each, and there was more to come. Millwall fans took this opportunity to laugh in the face of West Ham and Avram Grant by flying a plane over the DW with a banner reading: ‘Avram Grant – Millwall Legend’. Leading to great laughter and cheers from all three home stands, yet no smile from Avram. Somethings just never change…

Despite this wonderful and spiritual comeback, a draw was no good for either team. Both were in desperate need of a win. The result? The perfect ingredients for a free flowing, end to end, winner takes all finale at 100 mph. Not good for the old blood pressure though. From then on it was like a game of basketball: you attack, we attack. Midfield was none existent, everyone was either defending or attacking. Wigan’s fluid front four of Moses, N’Zogbia, Rodallega and Sammon ran West Ham ragged when fed by the likes of Watson and Diame, and created chance after chance. The most notable include the incident where Connor Sammon was clean through and was clearly taken out by Gabbidon, yet the referee Mike Dean waved play on, denying Wigan a free kick and a man advantage. Not to be downhearted, Wigan continued to press into stoppage time, with Ben Watson’s finish beating Rob Green and agonizingly hitting the inside of the post before falling into Green’s arms. Was that our chance gone? Then came the moment all Wigan fans dreaded. A right wing cross wasn’t dealt with and Carlton Cole had the goal at his mercy, with everyone’s hearts in their mouths, we looked on helplessly. Yet the deadly clinical finisher Cole totally messed up by misfiring the ball wide, with a minute to go, Wigan pressed for the winner. With both teams extremely tired, it was about who could dig deepest. That man was Charles N’Zogbia. There was only 30 seconds left, with the ball at his feet on the right touchline, he skinned Bridge with a double step over before sprinting inside towards goal. With eyes only for goal and correctly ignoring the option of a cross, he drove the ball hard and low under Rob Green. Cue wild celebrations and a stadium eruption.

I can honestly say I’ve never been happier to see a goal go in, especially given the circumstances. Only fans that were there at the the game like myself can truly comprehend the raw emotion felt throughout that electric game, with the pinnacle coming when the ball hit the net in the final minute. It’s impossible to quite put into words. This result gave Wigan genuine hope of a seventh season in the top flight when it seemed like there was none, and relegates West Ham, sending them back where they belong. The old saying is in football, ‘Eventually, things even themselves out.’ It might take a long time, but we’ve been shown that in football, things do even themselves out. Even over the course of four whole years sometimes. Despite this incredible win, I’m sure you’re aware we’re still 19th. Yet we have an unbelievable chance of safety on the final day if we can do our job against Stoke. A draw might be enough if other results go our way, a win should make sure for certain. Whatever happens, it’ll be incredibly dramatic and will live long in the memory for years. Elsewhere in English football, Man United won the title or something like that and Man City won some kind of Cup final 1-0. I’m going to get my breath back, see you next week. The Duke’s: Goal of the Week: There’s only really one contender isn’t there? Charles N’Zogbia’s last minute strike, Wigan 3-2 West Ham Save of the Weekend: Rob Green to deny Hugo Rodallega from point blank range, not that he knew anything about it though Blunder of the Weekend: Take your pick: Silva’s unbelievable miss in the Cup Final; Andy Carroll’s impersonation of Mr Sitter or Carlton Cole’s miss kick when presented with an open net. Other News: Avram Grant has been sacked from West Ham just one hour after the defeat at the DW Stadium; Steve McClaren looks to replace him to create an ‘England Rejects’ team with Rob Green, Matty Upson and Carlton Cole; and finally, Man United consider making a bid for the Olympic Stadium following West Ham’s relegation so more of their fans can make home games.