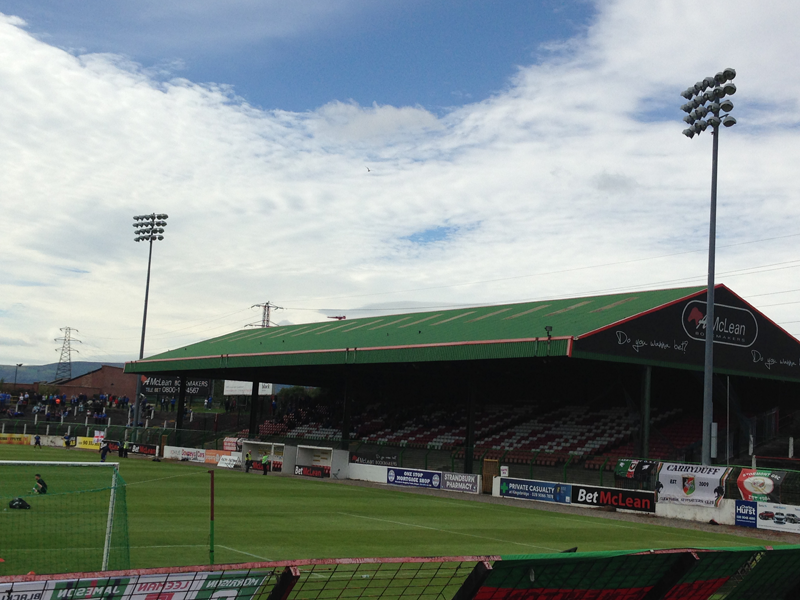 If Latics fans could have a Tardis I would suggest there are two destinations we would set the dials to.  The 11 May 2013 and Wembley would obviously be one.  But the other destination could be almost any date, but to Springfield Park.

We miss it.  It was a dump, cold and wet at times, parts of it stank of burgers, urine and ganja in no particular order, but it was home.  The DW is far more comfortable, it’s somewhere you can easily bring the whole family, you’re sheltered from the excesses of the weather particularly at half time, but it just isn’t the same.  Oh, if only we could go back to visit Springfield Park just one more time.

Well, I’ve just taken the opportunity.  Sort of, or at least the nearest thing.

While many of you were watching Forest grab a late, late equaliser, I was in Ireland.  The Republic’s season runs in the Summer and games are played on Friday nights, while in the North the season runs parallel to us here in England with most games being 3 o’clock Saturday afternoon.  So there is a little August window of opportunity to see two games in the two countries.

I flew to Dublin on Friday, and watched the Dublin derby between Shamrock and Bohemians on Friday night, a rather turgid affair enlivened by the fans’ mutual hatred of each other, and then a Saturday morning train from Dublin to Belfast got me to the latter city  in time for my real objective.

Because I was going to visit The Oval, home of Glentoran.  The ground that is Springfield Park’s doppleganger.

I had reckoned I could walk from my hotel in the City Centre to the ground quite easily, but that was my first (and actually only) mistake.  Whenever I stopped someone to confirm I was going the right way they answered in astonishment “You can’t walk there, it’s much too far”.

To be honest it was OK, but further than I had planned.  At first walking across the river and through tree-lined areas I soon hit more residential areas, small streets with the modern equivalent of terraced houses.

But you suddenly realise that every house has a flag flying outside – Union Jacks, Ulster flags or purple UVF.  The walls are decorated with murals commemorating various loyalist Volunteers.  This was very much the heartland of Loyalist East Belfast.  Fascinating history of times hopefully now gone, and even having been brought up as a good Catholic lad I found it interesting.

Mind you, I didn’t mention my upbringing to anyone.

The Oval is set right among a maze (no pun intended) of streets, and although you can see the ground peeping over the houses or glimpsed down side streets  it isn’t the easiest of places to figure out.  Basically follow people in green and red shirts.  Entrance was £11 adult, and £7 for old buggers like me.  Kids for £1 with an adult is good pricing.

But it’s when you get in and get to see the whole panorama that as a Latics fan your breath is taken away.

Standing behind the goal, you find yourself on a curved terrace with a dozen or so concrete steps, topped by a grassy bank.  The opposite end is similar although the area directly behind the goal is cordoned off with the visiting fans slightly to the right.

To your right as you stand on the terrace is a single layer stand running the length of the pitch, all seated now, but it is easy to picture it being terraced.  Again the half of the stand nearest to you is closed off, but at the further end the visiting fans are filtering in if they fancy a sit down.  The Coleraine drummer boy was in there too, banging out his support.

The team benches are in front of that stand too, meaning everyone has to trudge the full width of the pitch.

But it’s the view to the left that takes your Wigan breath away.  For rising there is an almost exact copy of the Phoenix Stand.  If you look at pictures the glass panels are slightly different.  The stand is painted in Glens’ colours of green, red and black, and across the front instead of “Welcome to Springfield Park” is emblazoned “Westbourne Glentoran Supporters Club” but that unmistakable Subbuteo look is there.

The only real difference from Springy is the metal fence all around, but hung on every inch of it are flags and banners declaring undying love for the team and country.  To your right are two flagpoles, one with a green, red and black flag of the club, and the other once again a Union Jack.  They certainly love their “flegs” in Norn Iron.

I spent the first half sat on the grassy banking munching away on a superb burger and chips from a catering van which proclaimed “local produce”.  It was Nirvana.  A bit damp on the bum, although hopefully that was externally sourced and not due to my age, but such a difference from the soulless bowls we have here.  This is one of the top clubs in the country remember.

For the second half I wandered into the Main Stand – there was no separate pricing structure, and after quite a climb up concrete steps found an empty wooden seat.  There was quite a mishmash of plastic and wooden seats, and a large pillar blocked some of the view, but the overall view was great, looking out across the “St Andrews Terrace lookalike” if I can call it that to the famous Harland and Wolff cranes called Samson and Goliath.

As for the game itself the standard was pretty poor – not as bad as the previous night’s Dublin match – but there was little structure to the play.

Northern Irish football I believe is semi-pro, so if you think about it training will not be all-day every day, and will concentrate on basic passing, heading, shooting, defending etc, with little or not time to devise fancy moves or set pieces.

And it shows. Were they playing with two strikers or one?

The first half wasn’t that exciting (well, I was excited just being there, but I wouldn’t want to watch it week in, week out) with Coleraine grabbing a goal before half-time.  The second half was more lively and with just 4 minutes gone Glens were back in contention from a corner.

With about an hour gone though, came one of the best goals I genuinely have ever seen.  A Glens player picked up the ball in the centre circle, ran forward about 20 yards and hit an absolute pearler from 30 or so yards out into the top corner.  If it had been in the Premier League we would never have heard the end of it.

It looked like the home team would have the points until on the 88th minute following a series of more and more bizarre refereeing decisions going Coleraine’s way, and I was genuinely being the neutral, the left winger escaped and put a cross into the box which met a visiting head and the points were shared.

Getting back into the City Centre was far easier, going onto Newtownards Road and picking up a bus that said, reasonably enough, “City Centre”.  Back to my hotel, a night drinking Guinness while watching the Tyson Fury fight on the TV, taxi to George Best Airport the following morning, and I was home just after lunchtime.

The Tardis disappeared for another adventure, and I was left with a host of great memories.  Springy may have been a bit of a dump.  But it was our dump.

If you do want to relive the times pop over and have a look before it’s too late.  Two years ago Glentoran got the go ahead for a £9.2 million redevelopment which would include rotating the pitch 90 degrees, and rebuilds.

And then all that will be left, will be memories.