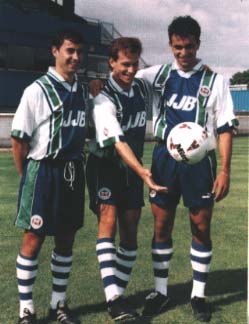 Joining Roberto Martinez at the newly named DW Stadium this weekend will be his old buddies Isidro Diaz and Jesus Seba….

The DW Stadium will be in for a treat on Saturday for the friendly game against SPL side St Mirren as Roberto will be joined by the other two Amigos Izzy and Seba.

The Three Amigos will be reunited on Saturday when Wigan Athletic hosts St Mirren in the opening match at the newly-named DW Stadium.

To mark Bobby’s first home match as Latics manager, he will be joined by two of his old playing buddies with Jesus Seba and Isidro Diaz back to re-enact the day of 14 years ago when they first stood in front of the Phoenix Stand at Springfield Park to take their first bow.

The trio first arrived in Wigan back in 1995, when Latics were still at Springfield Park and in the bottom tier of English football. All three played a massive part in Wigan’s promotion in 1996-97 and, although the Latics careers of Seba and Diaz was all-too brief, Martinez remained a fans’ favourite until his departure in 2001.

“Saturday will be a great day and very exciting for all three of us,” Martinez told the Evening Post. “Since 1995, Jesus and Izzy have followed Wigan Athletic very, very closely, and they are excited to be coming over and see the only home game before the Premier League season starts. They are also looking forward to seeing the fans again, and we will all be very excited to see them over here again.

“I still keep in regular contact with Jesus and Izzy, not as much as I would like because we are all busy people, but we speak whenever we can. We all had such a great time here, and we were so close, that it doesn’t matter how long it is since you’ve spoken, you never lose touch.

“We’re looking forward to welcoming them here and they are very excited to be coming back to a place they still regard as home. They will always be Wigan Athletic supporters – because this was the most special football club in all of our lives, Jesus retired at the end of last season, and Izzy the year before, but neither have put a pound on and could play a part in Saturday’s game if I need them.”

“Saturday will be the first opportunity that the players will have to play at the new DW Stadium, and it’s also only a week before the first Premier League game of the season, we need to be getting close to the intensity and the level of performance we will need at Aston Villa.”

The email as usual is jayt@cockneylatic.co.uk