They Thought It Was All Over

Well, the dark side might have, yet Darth Vader and co might have a rethink on the relegation battle following the victory against Birmingham.

The Luke Skywalkers amongst us, such as Griff and Standish, will be delighted to see that only three points separate 20th place (us) from 13th place (Blackburn). Although I’m sure they’ll be less impressed when the news breaks out that Loudmouth Blue and Fil Moss are their fathers. (Jayt: less of the Star Wars references now Duke)

The encounter between ourselves and Birmingham at the DW was dubbed a ‘must win’ and to be fair it was. A defeat would have left us six points clear of safety, which is quite a lot for a team that has only won five games all season.

Yet thanks to a much improved, battling display and a Maynor Figueroa stunner; that figure rose to six and now Latics fans can be looking up the table. Not that we could look much further down being last, but the Championship isn’t too far underwater.

The game was also the ninth game in which we’ve came from behind to gain at least a point from. Who said we never get anything from games after conceding first? Tongue is firmly in cheek…

Liam Ridgewell scored the opener on six minutes, taking advantage of some static defending in Latics’ box. Tom Cleverley swept home the equaliser with a poacher’s effort on 25 minutes.

Latics were the dominant force in the second half and created chance after chance, without taking them of course. With Di Santo up front though, is it any surprise?

Antolin Alcaraz then got a huge slice of luck off referee Lee Probert very late on in the game when his less than subtle shove on Curtis Davies went unpunished inside the defender’s box. There was a deafening silence all around the home stands as we all anticipated the referee’s whistle, time seemed to stand still in a Gladiator style moment, yet the referee waved play on and all was fine despite several suspected heart attacks. Oh I do make it sound dramatic.

Cometh the hour. Cometh the man. Maynor Figueroa doesn’t net many, yet when he does they’re always spectacular aren’t they? This was no different as he smashed past Ben Foster, right footed, from 25 yards out to send the twelve fans in the South Stand mental and the away fans back onto the M6.

This was the high magnitude and intensity game that could provide a base for us to push off on. Hopefully we’ll look back at that 90th minute winner and say, ‘That saved our season’.

Then who knows? It could be top four next season. (If we get relegated and you jump ships to City that is)

Of course, winning your games is only half the battle. Being bottom, it does help if those around you drop points too.

Although none won, those around us did tend to gain points as Blackpool, Blackburn, West Brom and West Ham all drew.

That wasn’t the case at Villa Park where Matt Jarvis’ superb strike earned Wolves a precious 1-0 away win to aid their survival bid.

You can always rely on Mick McCarthy to provide a blunt yet amusing post match interview, just like Alex Ferguson does on Match of the Day. This week was no different as his tone of sarcasm yet frankness stumped yet another reporter. Interviewing him must be a nightmare and here are some of his classics:

Reporter: “Mick, you’ve gained a reputation as a ‘dirty team’ yet your team seemed to play some nice stuff today”

McCarthy: “I know, it’s a joke. I told them to go out there and kick ten bells out of them!”

McCarthy: “No regrets, none at all. My only regret is that we went out on penalties. That’s my only regret. But no, no regrets.”

McCarthy: “It’s the usual one – a manager leaves, somebody else comes in and they get the result. Well, balls to that.”

Another one who was a nightmare for interviews was Gordon Strachan, interviewers must have been so careful not to say anything that they could be belittled for. Like so:

Reporter: “So, Gordon, in what areas do you think Middlesbrough were better than you today?”

Strachan: “What areas? Mainly that big green one out there…”

Reporter: “Welcome to Southampton Football Club. Do you think you are the right man to turn things around?”

Strachan:” No. I was asked if I thought I was the right man for the job and I said, “No, I think they should have got George Graham because I’m useless.”

Strachan: ” I’ve got more important things to think about. I’ve got a yogurt to finish by today, the expiry date is today. That can be my priority rather than Agustin Delgado.”

Reporter: “Bang, there goes your unbeaten run. Can you take it?”

Strachan: “No, I’m just going to crumble like a wreck. I’ll go home, become an alcoholic and maybe jump of a bridge. Umm, I think I can take it, yeah.”

Gordon Strachan: “We’re fourth! Fourth! I’m going home to get myself a Coca-Cola and a packet of crisps, sit in front of the TV and look at the League table on Teletext all night.”

English football needs men like McCarthy and Strachan, which is why I think the likes of the lighthearted Chris Kamara and ‘say it how it is’ Robbie Savage should be managers before too long. The likes of Paul Jewell and Jose Mourinho weren’t bad at pulling a couple of one-liners out the bag though were they? 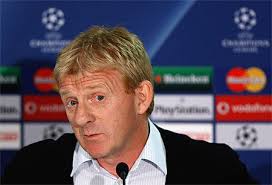 The worst for interviews must be David O’Leary, whose monotone and invariable response to any statement was littered with ‘on the fence’ comments like “At the end of the day”; “It could have gone either way” and “I’m not too sure, I didn’t see it” If it wasn’t for the Irish accent I would fall asleep just looking at that man!

Lastly, the discussion of ‘How many points will it take to stay up?’ has been rife across the country. So much it warranted a poll on our very own website, and I’ve developed a theory of how to calculate this. Yet please don’t judge its accuracy too harshly, it’s only a rough guide!

I’ve spotted a trend that the higher the title winner’s points tally is, the lower the amount of points is required to finish 17th and occupy the final survival spot.

This makes sense as by winning more games, the team(s) at the top are taking points off those at the bottom, therefore those at the foot of the table get less points. So less points are needed to survive.

Equally if the team at the top get a low total (for a winner that is) then there’s a chance the ‘lower’ teams will gain some points off them, increasing their total. And here’s some figures to help prove (or maybe disprove) my theory. 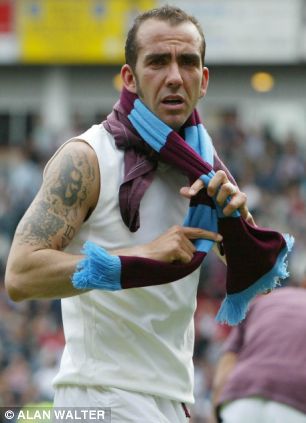 Okay, so the above wasn’t very definitive at proving or disproving my theory, yet it appears that the difference in points between 1st and 17th place is around the 51 points mark (if we’re using the mode average system, ooo get me!) Seeing United’s final eight fixtures and making a prediction, I’d say they should attain 82 points in total. Using my in depth research, this suggests that 31 points should be enough for 17th place. Which is not only impossible as 17th spot currently occupies 33 points, but it also does go against my theory that a low Champion’s total means a high survivors total, but that’s the beauty of statistics I suppose. After all, 46% of them are made up.

One final point though, in 2003 United came first and managed a tragically low 83 points and West Ham went down with a record high 42 points. Remember, Di Canio’s tears and a heartbroken Joe Cole against Birmingham? It was almost enough to bring a grown man to tears. Don’t ask me for too many more theories in the future guys.

Save of the Weekend: Rob Green to deny another Jermaine, Defoe his 100th Spurs goal

Teaser: Jermaine Defoe is stuck on 99 Tottenham goals, who did his first come against?