Tough at the Top, Tight at the Bottom and Poignancy at Molineaux

The Premier League is reaching the start of the end, and it’s tight at both ends and every result matters.

Due to the later than usual 5:30 kick off for the Latics away at Man City, us fans had the luxury of watching our basement neighbours’ games at 3 o’clock.

That luxury turned into frustration as two of our closest rivals, West Brom and West Ham, both secured vital wins to add emphasis on Saturday’s encounter with Manchester City.

Paul Scharner didn’t do his old club any favours when he headed home the final goal in a 3-1 derby win at Birmingham. This result lead to the cliche ‘Carling Cup Hangover’ being handed out left, right and centre to the Blues; which must have been awfully tedious.

West Ham on the other hand look to be on the rise, as Avram’s crew seem to be reveling from the ‘Scott Parker effect’, which Carlton Cole talked about in previous weeks. This time Stoke were their victims at Upton Park, with Demba Ba, Manuel Da Costa and Thomas Hitzlsperger the scorers. The result means not even Stoke in 12th are save yet and are in a precarious position even in lower mid table.

Wigan knew they’d be in the bottom three come Monday regardless of the result against City, yet this didn’t seem to hinder the boys’ performances as they put in a spirited display against an obviously more talented City side.

Although there was little attacking threat (which I will come on to) there seemed to be more of a battling spirit which hasn’t always been present this season. Latics had much of the possession and limited City to little chances.

The one half chance City created though was through David Silva, the Spaniard skipped past Adrian Lopez after his fellow countryman had slipped and hit a seemingly harmless shot towards goal. For Ali Al-Habsi, it must have been like a round of ‘What Happened Next?’ on A Question of Sport as the ball moved in slow motion towards him.

I think we all know that Ali’s blunder meant City were ahead and ultimately won 1-0, yet you can’t blame him too much as he’s saved us many points this season with his agility and shot stopping abilities. Crucifying him for one error would be mindless and of the Latics fans I’ve spoken to, this seems to be the general agreement. You can never be too sure though…

City never seemed to get out of second gear which annoyed me as they just seemed satisfied with their one jammy goal and were comfortable that it would be enough to see them through. Ultimately this ended up being the case, yet had Connor Sammon’s last minute strike gone in, it would have given a lot of people great satisfaction to see the look on Mancini, Balotelli and the likes’ faces.

Sammon’s introduction to English football came late in the second half and his bit of improvisation with a give and spin one-two with Hugo Rodallega nearly unlocked City for the first time in the last minute. His finish flashed across goal and just past the post, yet this bit of movement alarmed City’s defence and must have had players, fans and staff alike holding their breath for a second or two.

Hugo’s ability to play as a lone front man has been often questioned and against City it was clearly shown how ineffective he can be in that position. His hold up play is poor and his second touch is usually a tackle, such is the quality of his first.

I think he’d be good as a second striker, feeding off a target man, yet alone his poor movement leaves him isolated and often the midfield are late to support him. This is where I think we might struggle to get points, we are the lowest scorers in the league and the likes of West Brom and West Ham look dangerous going forward. We don’t and this is a major hindrance in our quest for survival.

On the plus side, due to ESPN’s ‘free weekend’ of viewing, I managed to watch the game in the comfort of my own home, as opposed to just a few minutes on Match of the Day. When we’re usually on last.

Turning our attentions to the other end of the table, where we can be onlookers and not have such great emotional problems riding on the outcome of each game.

Man United fans must surely get bored of the same old routine every season? I know I would be, and I’d say a title race is more monotone than a relegation battle, because there’s usually only two teams involved at the top. At the bottom, teams ‘scrap’ for points in a ‘dog fight’ which portrays passion and will power. When have you heard a title race being referred to as a ‘battle’?

Arsenal missed a golden opportunity to put real pressure on the arrogant bunch of tools from Manchester when they drew 0-0 at home to Sunderland. With Niklas Bendtner up front, is it any surprise they didn’t score? I heard a great chant about him the other week following yet another miss: ‘That’s why you’re 52, That’s why you’re 52…’

In the end, it wasn’t such a disaster for Arsenal as they ended up gaining a point on United after Dirk Kuyt’s hat trick meant United lost their second match in five days.

Luis Suarez was the star of the show, with Kuyt benefiting from his flair filled dribbles to tap home. The game also saw the introduction of Liverpool’s £35 million striker Andy Carroll, now he’s back though, the pressure is on him to perform.

United simply weren’t at it from the word go, and this blip in form has left Arsenal right back in with a shout of winning the league once more. The Red Devils’ solitary goal game from Chicarito, who’s performances have seen him nominated as the new ‘super sub’ to mimic the great Ole Gunnar Solksjaer. 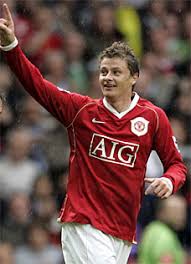 Comparisons have been made between the two and it’s easy to see why, both are brilliant finishers; they have a great attitude to their game; plus they don’t mind coming off the bench; and of course they’re both ‘baby faced assassins’. United just need a new Schmiechel, Neville, Keane, Beckham and who knows how long it’ll be before they need a new Giggs and Scholes too? They won’t be easy to find that’s for sure.

Liverpool will be hoping that Suarez and Carroll can be their new Dalglish and Rush, whether they will or not is yet to be seen; but after his performances recently, Suarez certaintly has the creative flair to match his manager in his heyday.

Whilst on the topic of past players, would anyone else not mind having a new Arjan De Zeeuw, Jimmy Bullard, Andy Liddell and Nathan Ellington?

On a more poignant note, Wolves fixture against Spurs was a fitting tribute to the late Dean Richards, who passed away recently.

Dean played for both sides, and fittingly, when the sides met on Sunday afternoon, there was a great ceremony in his remembrance with signed shirts from each of his former clubs plus a short biography on the club’s PA system before a minute’s applause.

The fact Richards died so young really puts life into perspective, as I’m sure people reading this are older than 36 and aren’t contemplating death yet. I’d like to assume you’ve got a lot left to live for and to think about what would happen to those around you if like Dean, you died at 36, is truly frightening.

It just goes to show that not even the rich and the famous are exempt from disease and Dean’s health problems halted what would have been a glittering career. I’m, sure he’ll be sorely missed by all that knew him.

Save of the Weekend: From what I saw of the weekend’s action, Joe Hart to dent our very own James McCarthy

Blunder of the Weekend: Besides Ali, Ashley Young’s penalty miss against Bolton. It wasn’t so much the miss, but the huge turning point it provided for Bolton to win a game Villa seemingly had control of.

This week’s Teaser: Back in the day, why did Bill Nicholson sign Jimmy Greaves for such an obscure fee and what was his reasoning for this?