Tuesday night at the Gills for a 1 all draw 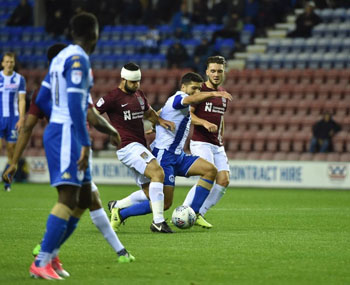 Wigan Athletic headed the League for the first time this season and travelled down to Kent to defend that position. Ruing our chances once again left us without a win in this game but it could have been much worse.

My day started off with a relaxing train journey down to London, taking in a few of the sights (OK, OK bars, but you could if you looked really hard see the tip of the London Eye). Around 4 o’clock we made our way on the train over to Gillingham.

After a couple of minutes (OK, OK pints) in the Britannia, it was off to the ground and looking forward to what would hopefully be another good win and opening up an even bigger gap from those play off places.

The ground still has those awful scaffolded seating in place, which I am pretty sure was just meant to be a temporary thing about 10 years ago. The game kicked off and Wigan. like so many times this season got off to a cracking start.

Chances were being created, Max Power had an effort saved and he looked like the player he was at the end of our promotion season in 2016, something that has been lacking since.

Crackers had a shot saved and we could have gone ahead from the resulting corner had the header been kept down. Nathan Byrne was running his socks off and was another that should have put us in the lead, his shot was superbly saved by Holy in the Gills net.

But the more chances we missed the more Gillingham came into the game, ten minutes before half time minutes they had their first wayward shot and it showed what their tactics (counter attacking and running at Dunkley) were going to be.

Ten minutes after half time they had their first shot on target, Chey Dunkley getting on the wrong side of his man, the resulting header hitting the back of Latic’s net. After 30 minutes we should have been 2 or 3 nil to the good and away, now we were having to try and wear down the now 11 defenders to get back level.

Substitutes Will Grigg and Gary Roberts both got the Gillingham man of the match Holy pulling off fantastic saves, but even he couldn’t keep the Captain out. After great work on the right by Byrne he passed to Morsy who punched and inch perfect shot past the Gills stopper for 1 apiece.

The final ten minutes saw Latics chase for a winner, but it wasn’t to come and we left Preistfields with a well earned point, but like at Peterborough, Shrewsbury and Portsmouth we were again wondering how we hadn’t put the game to bed.

Next up is Blackpool, where we hope yet again that Latics take their chances and leave Blackpool with a convincing three points.

We are over a quarter of the way into the season and in the top 2 by 5 points, I don’t think we would have knocked that back at the start of the season, so onward and upwards.