Two Footed Challenges, Howard Webb, Jean Beasejour and Everything In Between

Whether or not you want to believe Redknapp’s version of events and that he’d be stupid to risk such consequences for a few extra grand is totally up to you, the conspiracy theory is much more interesting, even if it does suggest he can actually read. I could proceed to slag him off as much as I please but it wouldn’t matter, partly because he’s unlikely to even be aware of this article, but also because he’d fail to make sense of it anyway (is he the only one?).

Regardless, he’s still a pretty useful football manager as it happens and the ideal opponents in such adverse circumstances are, let’s face it, Wigan Athletic. Of whom Spurs had little trouble dispatching 3-1, Gareth Bale proved that Ronnie Stam doesn’t have the ability to prevent him from playing (like some have suggested since last year’s encounter at the lane) as he tore Latics’ defence apart and helped himself to two goals.

At the weekend, the 1-1 draw against Everton can be considered a success, especially when you truthfully ask yourself what you expected the score to be.

It was Sod’s Law for Everton though, they beat Manchester City at home on Wednesday and then failed to beat Wigan on the Saturday. Who was it that said it’s a funny old game? Whoever it was is sensationally correct, we even get fans that claim to be ‘professional protesters’ handcuffing themself to goal posts. That’s what I call a professional knob head.

Wigan’s goal though was comical, wasn’t it? It summed up our firepower though if we have to rely on one in a million type goals like that, it all means that Phil Neville has scored more goals for Wigan than Conor Sammon has this season.

Of course, between those two games was the transfer deadline, which proved to be an anti-climactic affair. It seems that tough economic times have even affected the financial fantasy world which is football, I mean, in what other industry would a £35million or a £50million investment yield such little rewards? I’m mentioning no names of course.

There was no big money move this year which triggered off other transfers like the £24 million Darren Bent buy or Fernando Torres signing last year, which probably explains the lack of activity this January. The big clubs seem relatively happy with their squads and many managers (especially Wenger) seem unwilling to do business in January, considering his history with the likes of Jose Antonio Reyes, can you blame him?

Signings in January can be a huge risk, they could easily end up being a Charles N’Zogbia or a Wilson Palacios, whilst at the other end of the scale are Marlon King and Kristopher Haestad (remember him?)

The fact Wigan seemingly failed to even take the risk is alarming.

Jean Beasejour looked like he’d be the first of several reinforcements when he joined from Birmingham City to replace David Jones in the cursed left wing back position. That was until the Nicky Maynard deal turned out to be a hoax (I’m sure there’s many conspiracy theories out there); the unknown John Verhoek seemed just to be an easy way for the Sun to fill a few inches of their gossip column and nothing more (he could conceivably be a mythical character) and sadly, the interest in Billy Sharp seemed to be close to non-existent and he instead joined Southampton.

All this means we’re left with practically the same squad that we entered January with. In previous years, this would have been seen as a great success as we managed to hold onto our best assests, but this year is slightly different. We’re even faced with the likely occurrence that Hugo Rodallega will leave in the summer for absolutely nothing, at least he can help us stay up now, eh? Yet you’ve got to curse Jean-Marc Bosman and the infamous transfer trend he’s set since 1995.

On the pitch, the snow didn’t stop the Premier League from providing action for us all this weekend, with some memorable games and some incredible refereeing decisions.

Is it just me that’s getting fed up with the ‘two-footed’ hysteria at the minute? It’s getting a bit out of hand. Not long ago, if a player simply got the ball a tackle would be seem as legitimate. Now, if you even touch the player it’s a foul, possibly a red card. Did I miss when the game became a non-contact sport? 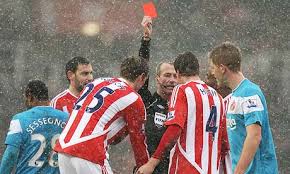 I’m sure I’ve mentioned this before, but tough tackles are a major part of the English football attraction. It’s almost impossible to make a slide tackle without contacting the opposition player in some form, why needlessly punish the game as a spectacle?

There are some crazy two-footers which warrant a red card, true. Yet convince me that Robert Huth’s challenge was worthy of a red and you’d be snapped up as Redknapp’s lawyer immediately.

I just don’t see it, if a player pulls out of a challenge and is in control of his actions, how is it a sending off? I can’t tell you, maybe it was down to the way David Meyler flew up into the air after the challenge. Not that I’m accusing him of diving however, I think Robert Huth could knock even the fattest pie-eating Wiganer flying (again, mentioning no names).

Chelsea and Man United served up a cracker at Stamford Bridge and despite being awarded two very generous penalties by his supporters’ club’s chief member, Sir Alex Ferguson still managed to complain about the officials. Am I the only one that found that totally unbelievable?

Equally as unbelievable was Juan Mata’s stunning volley; David De Gea’s surprisingly excellent one handed save and United’s second half come back. Just don’t mention Mr Webb, I did it once but I think I got away with it.

Finally, Wigan fans could take some consolation from the weekend that Blackburn seem to be sinking faster than Andy Carroll down Capello’s pecking order as they got pummelled 7-1 by Arsenal. Arsenal’s excellent front three of Van Persie, Walcott and Oxlade-Chamberlain were simply electric and each played brilliantly in a stunning attacking display. Blackburn meanwhile have great problems, one of which being their incompetent manager, but the other being that they simply can’t get points for toffee. Not that I’m in much of a position to talk as a Wigan fan.

Goal of the Week: Does anything beat Juan Mata’s almost Zidane-esque volley? I think not.

Paul Jewell of the Week: Robin Van Persie’s hattrick epitomized his excellent season as he effortlessly decimated a below par Blackburn side at the Emirates.

Paul Tait of the Week: With an own goal and a conceded penalty to his name, Chris Baird is a prime candidate; but who can say Tim Howard isn’t a worthy winner of this prize?

Quote of the Week: Unknown 5Live reporter “They shouldn’t be wearing gloves, get them off!” Does anyone else oppose this deluded and mindless ideology? I’m sure there were millions of people wearing gloves outside in what was the coldest days of the year on Saturday, what’s so special about footballers which means they’re prohibited from wearing gloves? Not everyone has to be the bastion of masculinity you know?

Boselli Watch: After deciding his celebrate his recent good form, Boselli went on a sky-diving expedition. Typical of his ture accuracy however, he missed the earth.