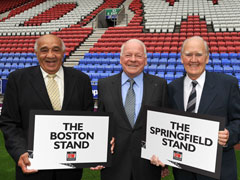 The JJB Stadium’s renaming has also heralded the renaming of two of the grounds stands with Wigan Athletic and chairman Dave Whelan taking note of the voice of his club’s fans for the new title of the West Stand.

At the beginning of June the Latics supremo announced that one of the stands would be retitled and then made another statement shortly after that he would be transferring ownership of the ground, which officially becomes the DW Stadium at the end of this month, to Wigan Athletic and that he had also extended the rugby club’s lease to 50 years.

However many fans of Wigan Athletic believed that their club would be left out in the stand dedication stakes with message boards and campaigns set up to ensure this didn’t happen.

Mr. Whelan however was quick to point out that he was open to suggestions and has now stood true to his word with the announcement that the West Stand will be known as The Springfield Stand and the East Stand changing to the Boston Stand.

The Springfield Stand recognises Wigan Athletic’s former home of almost 70 years which many fans harbour fond memories of while The Boston Stand is dedicated to one of the most famous names in rugby league folklore, Billy Boston, who made 485 appearances for Wigan Rugby League over a 14 year span – he was awarded an MBE in 1986.

Dave Whelan commented, “Whilst we are always looking forward it is always important to respect the past. Billy Boston for the Warriors and Springfield Park for the Latics are bastions of the two teams’ glorious past. These names will be a part of the town’s stadium and remembered for many years to come.

“The Warriors are the pre-eminent rugby league team in the world and deserve this accolade at the DW Stadium.”

“Also, I am immensely proud of the huge strides that Wigan Athletic have made as a club over the past 15 years or so,” said Whelan, “but we are also a club who do not want to forget our roots, because for all that we are now well established in the Barclays Premier League, Springfield Park is a fundamental part of our history.”

Wigan Warriors Chairman Ian Lenagan says of the move, “We are delighted to see both Wigan clubs represented in this way and agree totally with Dave Whelan’s choice of the Boston Stand. Billy Boston is an iconic name in the wide world of Rugby League and is forever associated with Wigan. It is fitting that one of the Stands is renamed after such a legend.”

Brenda Spencer, Latics’ Chief Executive said of the renaming, “We had so many happy memories at Springfield Park that it is a wonderful gesture to rename one of the stands at the DW Stadium like this. I trust that the supporters will welcome this move.”