Following a surreal and extraordinary weekend in football, supporters have put competition and rivalry to one side in order to unite as one in support of Fabrice Muamba.

In an otherwise unremarkable first half between Tottenham Hotspur and Bolton Wanderers at the Lane, the score was level at 1-1 with all concerned anticipating the half time whistle to blow relatively soon after an even encounter.

Yet totally unexpectedly, Fabrice Muamba suddenly collapsed due to a suspected cardiac arrest. Six paramedics rushed onto the pitch to treat him and attempt to resuscitate that twenty three year old midfielder. Reportedly, Muamba’s heart stopped beating for two hours as football held its breath in a period of pure shock.

Following this occurrence, the match was suspended with players and fans witnessing the tragic events visibly distressed at the sight of Muamba’s collapse. It has since been announced that Muamba is making small improvements by uttering words and moving his arms and legs but remains in a critical condition.

Since Saturday evening, players and fans have demonstrated admirable support and have united as one to show how in times of adversity, football fans aren’t the yobs or hooligans they’re often perceived, but instead sympathetic human beings who simply care for a respected individual.

Many professionals have taken to Twitter to broadcast messages of support for Muamba, showing that Twitter does have its uses after all. Rafael van der Vaart showed his remorse by tweeting: “Terrible what happened to Muamba during the game. We’re all praying for him.” Whilst Jermaine Defoe professed: “What I witnessed yesterday really puts life into perspective.When you see people judge others especially as they don’t know them..its wrong”. 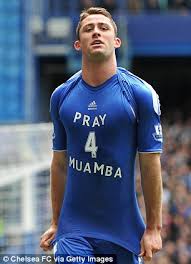 Meanwhile, players partaking in matches on the Sunday followed suit by adding a touch of class to proceedings. Real Madrid bore messages on their shirts stating their best wishes for both Muamba and Eric Abidal before their match against Malaga, the latter of which is set to undergo liver tumour surgery. Gary Cahill celebrated his goal for Chelsea against Leicester in honour of his former Bolton teammate, by unveiling a message under his shirt which read ‘Pray 4 Muamba’.

I think it’s incredibly moving how the vast majority of people have responded to this tragedy very appropriately and admirably. Hopefully Muamba will be fortunate to pull through and appreciate the messages of support the world of football has given to him.

I think I speak on behalf of everyone at Cockney Latic and indeed Wigan Athletic by wishing all the best for Fabrice and praying for a speedy recovery.

It seems slightly disrespectful to move on and for the time being forget the poignant topic of Muamba, but there’s not much else I can say that’s not been said before, so the show must go on.

On Saturday, Latics gave us a ‘typical Wigan’ moment yet again, as we were left to curse the return of a familiar old friend.

There was a time when Latics fans worshipped Paul Scharner, from the moment he walked through the door at Wigan he set the place alight with his blatant eccentricity. Scharns scored the winner on his debut against Arsenal in the Carling Cup semi final first leg and also became the first Latics player to reach 100 Premier League appearances, an achievement only achieved by four other players. He gave a sterling performance in the nerve shredding Battle of Bramhall in 2007 to endear himself to the faithful. By the end, some fans may not have been so keen on Paul following his ongoing contract fiasco and insistence on playing in central midfield. Regardless, from his fur coat to his blue hair and everything in between, I think Roy Hodgson was right when he said ‘there will never be another Paul Scharner.”

When he equalised for West Brom at the DW on Saturday after Latics dominated proceedings though, there was a part of me that wished that there was never a Paul Scharner at all. Okay, maybe that’s a bit far but you get my point.

A game that was typical of Martinez’s time in charge, Wigan showed much promise but were typically indecisive and lacking a cutting edge in the final third. In the end, the defence wasn’t strong enough to hold onto the one goal we did score and the points were shared.

The goal itself was scored by James McArthur, who can be considered prolific by Latics standards after bagging an incredible three goals this season, against Spurs, Bolton and now West Brom.

A point at home to West Brom can rightly be considered a well earned point, the Baggies are made of much stronger stuff these days. Long gone are the days of Megson, Dichio and Dobie, West Brom now have the flair of Odemwingie, Morrison and Mulumbu to call upon, with a pretty handy manager to match too.

Yet we’re at the stage now where we need wins, and only wins will keep Wigan in the Premier League. To be frank, if you can’t win games that you totally dominate for 90 minutes, you’re not going to win many.

Don’t get me wrong, there are many positive to take from the game, I’d much rather dominate a game and draw than be dominated and draw, but time is running out and that drought without a home win is getting even longer.This draw now means Latics have failed to do a league double over another team since their introduction to the Premier League, could it be a sign?

Latics managed to move off the bottom without even playing after Wolves capitulated against Man United, demonstrating defending straight from the footballing school of Caldwell as they lost 5-0 at home, and not for the first time. Following a disastrous run which has seen them concede 19 goals in five games, Wolves look set for relegation with Terry Connor nothing more than a rabbit in the headlights. Is he really an improvement on Mick McCarthy?

In the FA Cup, Torres, yes Fernando Torres, managed to end his goalless run by bagging two in a 5-2 home win against Leicester. Calling his twenty four hour spell a ‘dry patch’ is like saying attendance jokes regarding Wigan are getting slightly boring, but the drought is now over at last. Will this give him the platform to display his form of old? We shall see, let’s just hope he has an off day on 7th April, when Latics are in town.

Goal of the Week: Phil Bardsley’s strike from out of the blue for Sunderland against Everton was excellent, but the winner has to be Antonio Valencia for his textbook counter attack goal was first class, Brucey taught him all he knows.

Lee McCulloch of the Week: Let’s give the lad a bit of praise: Fernando Torres.

Quote of the Week: “United fans returning to all over the country, I want your thoughts…” Stan Collymore for once talks some sense by suggesting United fans live, well everywhere.

Boselli Watch: Never one to stay out of the limelight, Boselli has angered Coronation Street fans for admitting that it was him who killed Frank.