It was a weekend where every single Premier League team scored, for the first time ever. And yes, that does include Wigan Athletic surprisingly.

Martinez’s men travelled south to Upton Park looking for three points against basement club West Ham to take them out of the relegation zone. Unfortunately, it didn’t happen.

Avram Grant was another manager is dire need of a win to relieve some pressure, thankfully for him he got it with a 3-1 victory where Wigan failed to turn up.

Missing Alcaraz’s presence at the back, Wigan fell apart defensively and some galring positional errors and schoolboy blunders allowed each Valon Behrami, Victor Obinna and Scott Parker to score for the Hammers.

This result left Wigan in the bottom three still, with Wolves and West Ham below catching up and are now just two points behind.

Yet it could have been so different, Mauro Boselli missed a second half penalty after coming off the bench after his feeble effort was easily saved by Robert Green. I still wonder why Boselli was given the chance to score, yes it might have given him confidence had he scored, but the fact is, he didn’t. He is low on confidence and just off the bench, he can’t have even been warm and giving such responsibility on his first kick of the game was asking for trouble. It was no surprise when he missed and even Martinez is admitting he’s struggling to adapt to the English game.

Wigan then had a goal ruled out after Steve Gohouri headed home from a set piece, with the linesman wrongly ruling him offside. However, the goal would have been too little too late and would have been a very desperate excuse to cover up an even more desperate performance.

Although I’m still behind Martinez, you have to wonder if his time is coming towards an end because I’m sure Mr Whelan won’t be too happy at the prospect of the club heading downwards and as he did with Hutchings, might end the slide before it’s too late.

The team seemed to lack drive and enthusiasm and I can hardly picture Martinez giving a rousing speech to rally the troops. I’m not expecting Churchill, just something to motivate the lads. Judging by his post match interviews, I wouldn’t be motivated by one of his team talks.

One positive from the game was goalscorer Tom Cleverley, who will certainly go on to achieve bigger things in the future. He was a constant threat and ignited the little attacking spark Latics had, scoring the goal and winning the penalty.  It seems there’s an recurring theme between our best attacking players and their likeliness (or lack of) to be at the club by next season, or even by February.

A team that don’t seem to have any problems finding the net are Manchester United. Renowned for their attacking prowess, United smashed seven past Blackburn to claim a convincing win. With the inconsistent Dimitar Berbatov helping himself to five goals.

Without a league goal since his hat trick against Liverpool , the Bulgarian was at risk of losing his place due to the return of Wayne Rooney yet Ferguson’s decision to stick with Berbatov bore fruit as he decimated Blackburn.

None of his goals were spectacular, yet the ball seemed to fall to him in the box at every opportunity and his finishing was deadly. Everything he hit turned to goals (well almost) and was very close to being the first ever Premier League player to score a ‘double hat-trick’ when Paul Robinson denied his point-blank header.

I don’t think a player’s divided opinion quite like him before, yet many fans’ views on him depends on his form. When he scores he’s ‘an excellent technical player’ and ‘worth every penny’. However when he doesn’t he’s a ‘lethargic waste of space that’s not fit to lace Rooney’s boots’. 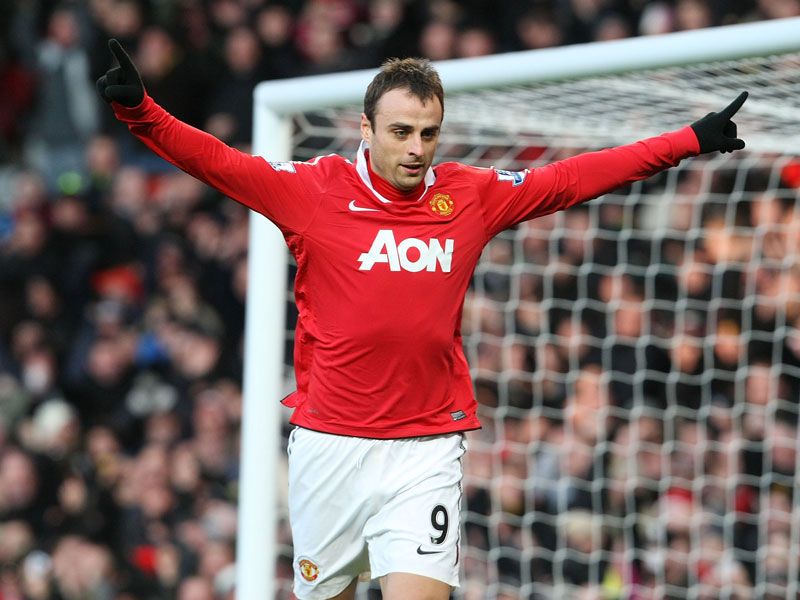 Nani and Park Ji-Sung scored United’s others and Chris Samba scored a late consolation, it was reassuring as a Latics fan to watch to prove that we’re not the only team that gets beaten convincingly at times.

The Premier League continued to excite with some excellent games this weekend, little more so than the early kick-off on Saturday at Villa Park.

The pre-match hype was about Robert Pires making an appearance against the club he was so successful for in his prime. He was an excellent player, who’s goalscoring ability from the wing was almost unrivalled. He seems to still have technical ability, unfortunately he seems to have lost his legs and had them replaced with steel girders. The fairy tale story didn’t happen, and he was withdrawn at half time.

That was all after Arsenal had dominated the first half, with Chamakh in particular going close on occasions. Aston Villa ignored the warning signs and Arsenal made them pay when the next defensive blunder came along. Andriy Arshavin took advantage of a missed interception and cut inside to rifle a low shot past Friedel. Samir Nasri then failed to make it two seconds later when he rounded Friedel before finding the side netting.

Youngster Ciaran Clarke had a day he won’t forget in a hurry, ending up with his first two career goals for Villa to put the game in the balance. The first of which was a sweet left foot volley from the edge of the box. Another youngster impressing was Barry Barran, the midfield maestro whose passing ability was there for all to see. He really made a difference in Villa’s midfield and played like an experienced veteran.

Unfortunately for Houllier’s young crop, Arsenal scored twice more to finish the game off and seal the points.

Marouane Chamakh bagged the first minutes after Villa made it 2-1 after poking past Friedel after Villa’s defence were caught flat by a through ball; Jack Wilshere then made it 4-2 in injury time with a diving header from close range.

A high tempo game between two young, talented sides was the perfect way to start an enthralling weekend of football, with the best side winning and going top temporarily.

Wolves earned three points from a five goal thriller at Molineaux against Sunderland. A late comeback thanks to goals from Stephen Hunt and Sylvain Ebanks-Blake made sure of the win after Danny Welbeck and Darren Bent’s goals had seemingly put the game past the home side.

The result capped off a bad weekend for Wigan with the two teams below winning and Birmingham, the team directly above, getting a point at Fulham. It was hardly a weekend to remember for Latics, next week we host Stoke City, who are fresh from outplaying Man City at the weekend. Enjoy it folks and I’ll be back next Monday.

Blunder of the Weekend: Alex’s perfect through ball past the keeper, unfortunately it was to opposition striker Andy Carroll who had an open net, Newcastle 1-1 Chelsea

Save of the Weekend: Brad Friedel to deny Marouane Chamakh, Aston Villa 2-4 Arsenal

This Week’s Teaser: When was the last time Arsenal lost at Villa Park, and who scored the winning goal?