As relative minnows of the Premier League, us Wigan fans we can only watch and dream of signing the players our lot have to face every week. But let’s be honest, if we could choose one ‘fantasy signing’ one player that would make the list is Fernando Torres; one that wouldn’t however, is El-Hadji Diouf.

It was a weekend that reflected the script for the season so far, with David Silva getting another man of the match award; Wigan getting a disappointing result due to several shootings in the foot and Fernando Torres being about as predictable as a heat wave in Iceland.

For the latter, it was almost a repeat performance from Old Trafford.

It started off reasonably well for the Spaniard, he even scored on Saturday for Chelsea against Swansea. A £50 million striker, scoring? You never hear of it do you?

What we’ve become accustomed to with Torres in recent months though, is moments of pure disappointment.

Just like last week’s open goal miss, Torres’ goal this week was soon to be followed by a two footed challenge and a red card.

Although not at his best, reports of the death of Fernando Torres and the resulting obituaries have been vastly over-exaggerated. Torres has been promising recently, despite his typically tragic moments and apparent lack of desire; he is still the same player that looked like a world beater at Liverpool, it’s just up to Villas-Boas, Chelsea and Torres himself to dig out the top striker that he undoubtedly is.

as been in the news recently, responding to the ‘expert’ analysis of Alan Hansen following his comments on Chelsea’s performance at Old Trafford in his Daily Telegraph column.

Hansen claimed that Villas-Boas was ‘naive’ in being so open against United and believed that this played into United’s hands.

Wait a second, this is the guy that proclaimed that Fergie’s United side would ‘never win anything with kids’ calling someone else naive? Welcome to England Andre, I bet they didn’t warn you about this kind of stuff in Portugal, did they?

Villas-Boas was predictably unhappy with Hansen’s comments, and the man had a point. He claimed that Chelsea weren’t naive at all and could easily have won the match if a couple of refereeing decisions gone their way and if their £50 million striker could use a banjo more accurately to hit the proverbial barn door.

You’ve got to feel for Villas-Boas, constantly referred to as a ‘Mini Mourinho’, it’s time he made a name for himself at Chelsea. The media seem content on focusing on and exaggerating the negatives at Chelsea, such as their aging squad, their lack of title credentials and the decline of Torres, Lampard and Drogba.

These kinds of media created myths are the product of jumping on a bandwagon which has little substance behind it.

Simply because Lampard didn’t get into the latest England team due to Capello being insistent on picking distinctly average players such as James Milner, Stewart Downing and Andy Carroll; and Lampard has been injured for a while so he hasn’t scored 20 goals a season like we’re accustomed to, doesn’t mean he’s on his last legs at all.

Chelsea have lots of young talent such as Lukaku, Daniel Sturridge and Josh McEachren, just because they also have a few key, experienced figures such as John Terry, Frank Lampard and Didier Drogba doesn’t mean they’re an old squad ready to collect their free bus passes. If anything it demonstrates their blend between youth and experience.

All this shows that if Villas-Boas and Chelsea have problems, I’d love to have some of them.

Compare the team selections between Villas-Boas and Martinez and it’s like comparing gold to mud.

Villas Boas: “Hmmm, should I play Mata out wide with Anelka and Drogba up front, or bring in Malouda and stick Torres up front?

Martinez: “Gomez or Di Santo? Results are not the priority right now.”

My point is, despite all the media attention surrounding big club’s ‘problems’ and making a mountain out of their mole hills; the problems faced by smaller clubs such as ourselves are much greater.

Seriously, how are we supposed to compete with an average wage of £20 per player and a bag of Uncle Joe’s as a bonus for scoring?

Maybe I’m exaggerating (a little) but the principle is still there. Chelsea are supposed to be struggling when they fail to bring in the likes of Sneijder and Modric, we have to put up with transfer speculation involving El-Hadji Diouf.

There are three things I hope I never have to experience during my lifetime. Firstly, I hope neither I nor any of my close friends or family ever suffer from cancer. Secondly, I hope that I will never find myself homeless. Lastly, I hope that Wigan Athletic never sign El-Hadji Diouf.

Now Diouf is apparently on trial with the Latics, one of those nightmares might not be too far away from coming true.

Admittedly, the lad isn’t a bad player. Despite playing for Liverpool during the Houllier era and becoming so used to Big Sam’s long ball tactics that the latter signed him wherever he went that is.

It’s his attitude that gets me.

Last week I discussed how Joey Barton is regularly the victim of unnecessary hatred and media bandwagon jumping. In contrast, Diouf is hated because he is an idiot.

No player can be hated by every single football fan in the country without reason (I include Barton in this). 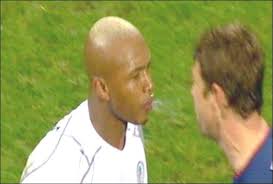 I don’t care about all the other incidents involving Diouf’s, my opinion of him wouldn’t intensify if he shot someone tomorrow. The underlying fact is that he spat in the face of Arjan De Zeeuw. In comparison, that’s like taking a dump on the Queen and proceeding to punch her in the face to your average Wiganer.

That is simply why Diouf can never be a Wigan player. Nuff said.

Without dwelling on the Spurs performance too much because I don’t want to depress you, we lost 2-1 to a very good side and Diame scored a decent goal.

Not too miserable when you put it like that is it?

Goal of the Weekend: Demba Ba’s opener on the turn was a stormer, and his first since that epic encounter between ourselves and West Ham at the DW in May, Newcastle 3-1 Blackburn

Gary Teale of the Week: I’m going to be biased and give it to Steve Gohouri, despite his red card. It was clear that he wasn’t 100% fit and was unfair to give the task of handling Gareth Bale, the winger that happily destroyed a 100% fit Maicon last season. Gohouri’s admittance that he let his side down was refreshing to hear.

Gary Megson of the Week: For the second week running, Fernando Torres for a shocking tackle on Mark Gower, he only has himself to blame for that one. At least he won’t win this award next week as he’s suspended.

Quote of the Week: Step forward, Sky Sports’ Tony Gale: “When that happens, the game plan goes out of the wall.” Explanations on a postcard please.

Boselli Watch: Martinez’s latest quote: “He has been promising and is adapting really well, just one more loan spell and he’ll be ready for English football.”