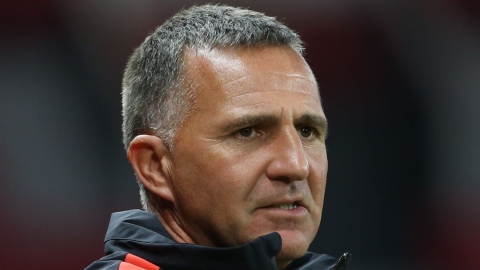 Well the speculation is over and we have got a new manager in the form of Warren Joyce, he will take over at Wigan Athletic immediately, taking his first training session Thursday.

No more speculation and no more waiting, we have our new manager and he is starting tomorrow. Warren Joyce might not be a household name but he certainly is very well respected in the game.

I can’t really add any more than is what is on the official site at the moment, so here is there transcript:

Warren Joyce has been appointed as the new manager of Wigan Athletic.

He is the man to take us forward in the long term.”

David Sharpe – We are delighted to announce Warren Joyce as the new manager of Wigan Athletic.

Warren joins us after managing the Manchester United Under-21 and Under-23 squads for the past eight years. He has signed a three and a half year contract and will be in the DW Stadium dugout for the first time when Latics face Reading this Saturday, November 5.

Joyce will meet his squad for the first time tomorrow morning (Thursday) to take charge of his first training session as manager, with exclusive coverage on the official website and social media.

Wigan Athletic Chairman David Sharpe said Joyce is someone he has admired for a long time and is convinced he is the perfect choice to take the club forward.

“Warren has everything we are looking for,” he said. “He is an exceptional coach who has a reputation within the game for being among the very best at bringing through young players, as his record at Manchester United shows. But more than that, he has a winning mentality which transmits to his players and he has achieved great success in his time at United. It’s the perfect combination.

“Warren has had several high profile opportunities but wants to move back into management and it is a measure of how highly we rate him that we are making such a long-term commitment.

“From the moment we met, it was clear that there was a connection. He is a highly professional, focused and ambitious person and we share the same views regarding the long-term vision for the club.

“He comes highly recommended and I am confident that we are appointing an excellent manager.”

Joyce is widely considered within the game to be one of the best coaches in the country and his achievements with the Manchester United Development Squads, including winning back to back Under 21 Premier League titles among several other trophies, are highly impressive.

He has coached current regular United first teamers Paul Pogba, Jesse Lingard and Marcus Rashford, along with players out on loan from Old Trafford this season, including Adnan Januzaj, James Wilson and Cameron Borthwick-Jackson.

As a player, Joyce was a talismanic midfielder who amassed over 700 career games for Preston North End, Bolton Wanderers, Plymouth Argyle and Hull City.

He first tasted management in 1998 in a player-coach capacity whilst still at Hull. The Tigers were on the verge of bankruptcy and facing relegation from the Football League, but Joyce steered them away from danger – and is still revered on Humberside for doing so.

Coaching spells at Leeds United, Stockport County and Tranmere Rovers followed before he joined Royal Antwerp as manager in 2006. The Belgian club had forged links with Manchester United and in 2008, Joyce returned to the UK as joint coach of the United Reserves team, alongside Ole-Gunnar Solskjaer. He took sole charge in 2010 and has been an integral part of their success.