Was A Frenzied Deadline Day Enough For The Latics? 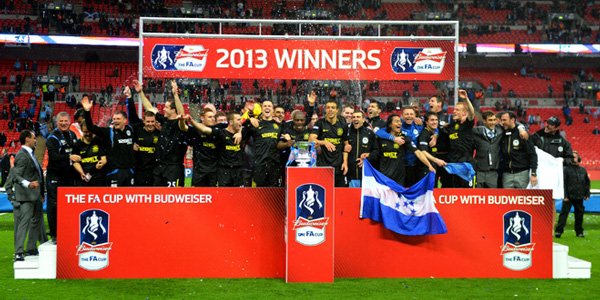 There are a lot of teams fighting their own battles at the moment. The New Year comes in, there is so much excitement, or at least anticipation, for the transfer window and the potential comings and goings that it entails.

There are those seeking the glory of trophies and the triumph of promotion, and those at the opposite end of the spectrum who are fighting for survival, trying to solidify their resources in order to stay afloat.

Quite obviously the Latics are counting themselves in the latter camp. “What’s gone wrong at Wigan Athletic?”, ask the media, and that is echoed by fans in day-to-day conversations. From 2005 to 2013 we were looking at a Premier League side.

Granted one who were never challenging for the title, but the hardened battlers of the mid-2000s fought tooth and nail to establish themselves and there were good cup runs which served as book ends for the entry and the exit from the top tier.

After taking the club to their first FA Cup final victory, Roberto Martinez called relegation ‘the lowest of the lows’. The massively conflicting emotions of jubilation and devastation have hardly been so closely entwined in football. In fact, it made the team the first ever to win the cup and be relegated in the same season. However, there was some consolation. The form that had taken them to win the cup showed that, on their day, they could perform. Granted it’s what happens over the course of a league season that is most important, but they had taken good scalps on their route to Wembley.

People were convinced that it could be rectified quite quickly. Martin Keown wrote that it could just be “a blip on the radar”. He took the glass half full approach, as did many others, and we saw a side who had sadly dropped into The Championship, but not one that was defeated. It all looked set to come to fruition. There was another FA Cup semi-final for the Latics and some confidence for the play-offs after a fifth-place finish. Semi-final defeat to QPR was crushing, and it’s well known that the longer you stay in the division the harder it is to crawl back out.

In the second season back down there, it’s fair to say we’re seeing the impact of that. Over half of the season has gone and we’re sat firmly in the relegation zone, languishing far from safety. The relegation odds have Malky Mackay’s side as 4/5 with betfair at the time of writing.

Though the halfway mark has come and gone, there are 46 games to play in the Championship and it’s not all doom and gloom yet. It’s not a dead cert that we can expect the drop. The optimist looks towards those above who are struggling for form, like Brighton and Charlton, as well as fellow northerners Leeds United and Huddersfield Town. The optimist also looks to the fact that three or four wins can change a lot. But can the optimist look to the recent signings for inspiration?

Well, with Callum McManaman over to West Brom, while Shaun Maloney and Ben Watson have also left, you would have to weigh up the positives and the negatives. Have the replacements been good enough to fill some pretty big spots on the team sheet?

A couple of good loan signings can inspire some confidence. Sheyi Ojo has come on board from Liverpool as a great young prospect. The England under-18 international will get vital first-team time after only featuring on Liverpool’s bench. The manager sees it as “productive for both parties”. If the winger can inject some pace into proceedings and maybe even a couple of goals, it will be value.

Meanwhile, Leon Clarke has made his way over from Wolves. Although he has had a patchy return to Molineux, Clarke has shown his consistent goalscoring ability in the past with the likes of Coventry City, Sheffield Wednesday, Scunthorpe United and Chesterfield. A return to form would be well needed for Clarke and the Latics. There are only three clubs in the league with worse goalscoring records so that will be key moving forward.

Cameroon international Gaetan Bong was a useful pick-up as a free agent. The 26-year-old left-back has 13 caps for his country as well as useful experience around Europe. Mackay said he believed Bong would be a very good addition to the squad after he had ‘impressed him a lot’.

It wasn’t a bad transfer deadline day in terms of getting pen to paper, with all three of the above getting confirmed. Prior to the final day of madness, others were brought in to the squad to beef up areas or to plug the gaps left by those on their way out.

Billy McKay has had a good goalscoring record for Inverness this season and bringing in the Northern Ireland international was a success. He bagged more than 50 goals for the Scottish side in his time there since 2011 and that’s positive for the aforementioned dire need for firepower upfront.

Leeds defender Jason Pearce crossed the Pennines on a permanent contract. Mackay cited the way he “takes responsibility” and “energises those around him” as key factors. When you’re at the bottom and looking up with only a relatively short timeframe to do it, that’s exactly the kind of player you need. Players with the wrong attitude can quickly become deadweight, but Pearce, a leader and warrior, according to his new manager, will inject some much needed gusto.

There have been plenty in and plenty out. Several of the old Premier League regulars have been replaced with Championship stalwarts, but it’s not all downgrading by any means. There are some players now in the mix who have ambition and drive. That counts for a lot when the situation you’re in isn’t the best.

It’s been a big fall for Wigan over the past couple of years and the transition isn’t easy. Take a look at this if you need cheering up. But it would be all the more woeful if they had their second drop come summertime. That’s not inevitable and taking that line will only lead to the situation getting worse. At least Mackay has worked to bring in solid players to try and consolidate at the back while also offering options at the front.

It’s hard to sit here and say that he will have done enough when there is still a wide deficit, but February could make a difference. League leaders Bournemouth will not be welcome visitors, but Nottingham Forest, Reading, Charlton Athletic and Cardiff City are all mid-to-low-mid-table while rock-bottom Blackpool might be an opportunity for three points. It’s not unreasonable to look at those games and see ten points, is it? Going into March with that would make the charge much stronger.

Maybe that’s just being optimistic, but it’s too early to give up just yet. March and April won’t get any easier, but it all comes down to the size of the fight in the dog. Do the Latics have it? We’re about to find out.