What a difference a referee makes 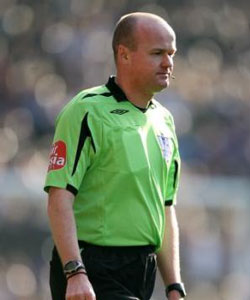 Shows what happens when Wigan Athletic get a decent referee…. In all these years we have been in the top flight, that has got to be the best refereeing performance I have seen, especially so given that he was in front of 40,000 (I nearly said screaming then, but it was more like a church with roudy Wiganers in there) Scousers.

Not taking anything away from a superb team performance by Latics, we for once didn’t have to contend with an official that consistently gives advantages to the opposition, hats off to Lee Mason for being brave enough to give a level playing field.

He didn’t shirk at the nailed on penalty, he didn’t fall for the Suarez theatrics, he didn’t let the constant hounding by Gerard and his boys sway him in the slightest. It was a very good refereeing performance and he should be proud of himself.

We have some very important games coming up and to get officials that did their job to their best ability is a refreshing change, let’s face it we haven’t had the rub of the green for a long time and it will probably be a long time before we do. So to get a level playing field against any team is very welcome, even more so when we turn it on like we did this weekend.

Who knows what position we would occupy right now had we had Lee Mason refereeing like that evry week, but I bet we wouldn’t have been staring relegation down the barrel. I can only hope we get more of the same for the closing games, unfortunately I feel we will be back to normal if not this weekend, certainly the next three weekends after that…. I dare them to prove me wrong.

Back to the magnificent team performance that brought such an historic first win against Liverpool at Anfield. From back to front Wigan stuck to their task, got a deserved penalty when Skirtle tried to kick Moses’ head off (possible the only thing Mason got wrong was not booking him).

Maloney had a long wait to slot his kick but he was man enough to power it home with Reina guessing the right way. Even when Suarez got the equaliser we didn’t cave in and what a tremendously cool finish it was from skipper Caldwell to claim the points.

Many pundits will say how poor Liverpool were, I feel it was us that made them play that way and so ALL credit must go to the players and manager on this occasion. What we need to do now is keep this momentum going against Stoke this weekend and set ourselves up for the clashes against Chelsea, Manchester United and Arsenal.

Stoke are next at the DW Stadium and we have to look at beating them and also two of the three remaining home fixtures after that. Nobody would give a chance, but they never do…. so let’s get at them and survive another year.