What’s happened in the past four weeks? 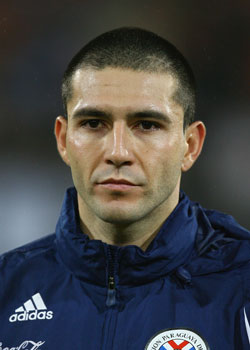 Wigan Athletic fans were expecting a mass exodus this in summer’s closed season, but as of yet the talking has been about who we are bringing in as the expected deluge of offers for our players have yet to materialise. There is still a lot of time left but with the World Cup and such starting this week, there will not be much happening over the next couple of weeks or so…

Well so far we have secured the services of two players, Antolin Alcaraz is a Paraguayan International whilst the impressive Steve Gohouri made his move permanent the second he was offered a full contract.

Going out has seen just the departure of Thomaz Cywka to Derby, the young Pole decided that he wasn’t going to break into our first team and so went to Pride Park where he had been on loan this season.
There is still a bit of confusion regarding the Club Captain Mario Melchiot, as Qatar Club Umm Salal claim he has signed for them but no word has yet been given to Latics who themselves have offered an extension.
Cardiff is thought to be after Jason Koumas and hundreds of French Clubs are the services of Olivier Kapo, both players are probably not in Roberto Martinez’s plans either way. Birmingham have been told where to go with regards to the pittance £8 million offer they made for Charles N’Zogbia whilst the sounds from Arsenal have now quietened with Hugo Rodallega.
Reports are flooding all over everywhere that we have had a $7.5 million bid accepted for Mauro Boselli with the player expected at the DW after he returns from his holidays this week. And we are leading the race to bring another Scottish starlet and friend of James McCarthy, James McArthur should decide if he wants to come to Wigan quite soon.
The Latics gaffer reckons we will see five or six players sign out of the seventeen we are monitoring and only time will tell if any players decide to leave, I guess we will know a lot more once the World Cup finishes.

Good luck to Steve Gohouri, Richard Kingson, Vladimir Stojkovic, Hendry Thomas, Maynor Figueroa, Antolin Alcaraz and Won Hee-Cho in South Africa at the World Cup Africa (as long as they don’t meet England obviously).
You only have until Wednesday to enter the Cockney Latic World Cup Prediction Tournament, you can enter for free or join the prize competition, the choice is yours but you need to make it quick – click here for the details.

Click here to disucuss all the transfer runours and many more issues on the Cockney Latic message boards.