Where is the famous Latics 2013 FA Cup winning side? 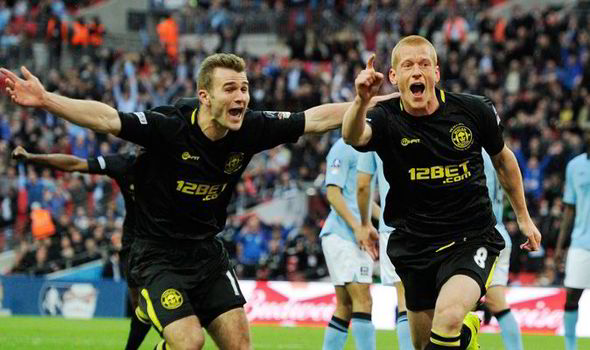 When substitute Ben Watson made a run into City’s box to meet a superbly swung in a corner from Shaun Maloney, few would have expected the incredible finish he was to deliver past a hapless Joe Hart. Watson’s 90th-minute header put City on the canvas and clinched one of the greatest FA Cup upsets of all-time.

Incredibly, over four years have passed since those dramatic scenes at Wembley in May 2013, what has become of the

starting line up that pulled off the modern day version of the David and Goliath story?

Goalkeeper Robles was on loan from Atletico Madrid during Wigan’s remarkable FA Cup win. Relegation to the Championship meant that Robles opted for a move back to his parent club Atletico once the 2012/2013 season had concluded. The Spanish shot-stopper then moved to Everton during the summer of July 2013 and has remained there ever since. He has 64 appearances to his at Everton name but finds himself down the pecking order behind Jordan Pickford and has publicly stated he will look for a move away at the end of the season.

The long-serving Boyce left the Latics after making 298 appearances over a 9 spell year at the club in 2015 after Wigan decided not to offer him a new deal. Boyce spent a year at Blackpool and left the Tangerines in July 2016. Since then Boyce hasn’t found a new club but unusually hasn’t announced his retirement either as the 38-year-old still plays for Barbados.

Winning the FA Cup with Wigan proved to be Scharner’s swansong as the no-nonsense Austrian retired in September 2013. On loan at Wigan during the second half of that season, his loan spell came to an end at Wigan he moved back to parent club Hamburger SV and called it a day not long afterwards at the age of 33. Who can forget the shift Scharner put in during the FA Cup final as he kept the dangerous Sergio Aguero from getting on the scoresheet? A wise move to go out on a high at Wembley.

Like many of the Wigan side of 2013, Alcaraz left after relegation and has since played for Everton, UD Las Palmas and is now plying his trade in the Paraguayan Primera Division with Club Libertad. Alcaraz was part of the gang that followed Martinez to Everton but unfortunately, his form never really got going at the club. Aged 35, he will be entering the final stages of a career that reached its peak at Wembley during that famous afternoon in May.

The Honduran international left Wigan in 2015 and went across the Atlantic to play in the MLS with Sporting Kansas City where he is contracted today. Espinoza has become a fan favourite Stateside after making 217 appearances, including five goals and a very handy 19 assists. It is clear that Espinoza feels at home at the club having played for Kansas before joining Wigan in 2012. His career has come full circle after a very rewarding time spent in England with the Lancashire club.

Midfielder McCarthy joined the mass exodus of players that followed Martinez to Everton in the summer of 2013. McCarthy’s career has fared better than others that went to Goodison Park and he remained there since leaving the Latics. McCarthy has made 133 appearances for Everton but has been injured since pre-season this time out. With his club precariously placed at just 11/1 in the latest sports betting odds to be relegated, it shows what an important player the FA Cup winner has become for them. Everton fans will be desperate for his return.

McArthur left Wigan in September 2014 for Crystal Palace where he remains today. The combative midfielder has made 104 appearances for the Eagles, scoring 12 times. McArthur is faced with having to keep Palace up this season and could have his most productive season yet as the Eagles look for a saviour as they settle down for a relegation scrap. McArthur will know remember well how much it hurt being apart of the Wigan team that was relegated and may well go head-to-head with former teammate McCarthy as the run-in materialises.

The Attacking midfielder left Wigan in 2014 for the North East as he joined Sunderland only to re-sign for the Latics in August 2016 on a free transfer. Gomez left in January 2017 to join Spanish outfit Rayo Vallecano, but now finds himself at Levski Sofia in a career that hasn’t seen him settle since leaving Wigan. Gomez is 32 so may well be entering into the twilight of his career but still possesses that electric burst of pace that made him so valuable to the Wigan cause over the years.

Callum McManaman left Wigan in January 2015 to join Premier League West Brom. He made the switch to Sunderland in August 2017 and brought the curtain down on a miserable time in the Midlands. McManaman was man of the match during the famous FA Cup triumph and will no doubt be a bit dejected with the way things have gone at West Brom. At 26 he still has the chance to resurrect his career at Sunderland who will be desperate he regains the form that made him so sought after.

Maloney called time on his Wigan career with a move to Chicago Fire in January 2015, before moving to Hull in the summer of 2015. The Scottish midfielder retired in July 2017 and has now taken up a coaching role with former club Celtic. Maloney’s ability to curl the ball into the net with that incredible right peg of his was the reason he was able to continue playing for a couple of seasons longer after leaving Wigan. Injury eventually curtailed his career at the age of 34 but is now loving life at Celtic Park as he embarks on what he hopes will be a long coaching career.

Kone joined up with former manager Martinez in a move to Everton in 2013. The 34-year-old Ivorian left Goodison Park in 2017 to join Sivasspor where he currently plays today. Kone’s time at Everton wasn’t a waste as he managed 66 appearances and scored 10 goals with 3 assists. Like many of his fellow players from the FA Cup victory, Kone is also entering the latter parts of his career. Life in Turkey has started off incredibly well, with Kone netting 7 times in 12 games for Sivasspor.

The match-winner from the 2013 cup final eventually left Wigan in January 2015 for Watford. Since then Watson has made 70 appearances for the Hornets and has found the back of the net once. It has been tough going for Watson this season as he has spent the majority of his time on the bench. At 32 years old Watson will be wanting to play a bit more frequently and may fancy a move away from Vicarage Road to pursue one last hurrah. It is hard to imagine anything else eclipsing the occasion he rose up highest to send a bullet header flying into the net.