As Mario Balotelli lifted his shirt to reveal his character defining slogan and stood defiantly like the emperor of Old Trafford, it provided a clear image of power and a shift in dominance across Manchester.

Ultimately, the title hasn’t been won nor lost yet, never has it been in October, but City delivered a psychological hammer blow to their rivals on Sunday.

United haven’t been humiliated like that in years. 37 unbeaten league matches leading up to the fixture signified United’s strong presence at home. Despite this, City demolished them.

Mario Balotelli’s double prompted hundreds of typical firework puns from the watching media following him reportedly setting his own bathroom on fire with a firework.

‘Why Always Me?’ Read Balotelli’s t-shirt, he should have that written on his gravestone. 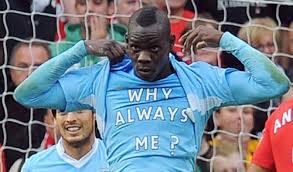 To answer your question, you’re hardly the shy retiring type are you, Mario?

But he’s top quality isn’t he? There’s pure entertainment from every aspect of his life, of which the media latch onto obviously. The life and times of Mario Balotelli would be an incredible read if it were every made into an autobiography. If he can read and write that is.

Since his arrival at City, we’ve heard about him obtaining crazy speeding fines; confronting school bullies and wearing incredibly stupid hats. Add to that the firework incident and you have a liability on your hands.

Despite this, there’s no denial of the talent, so at least his arrogance is justified slightly, unlike Nicklas Bendter et al.

His recent form has confirmed his ability, three goals in three games leading up to the derby have underlined his ability to score and his performance on Sunday showed he can do it on the big stage.

He is the one person who has benefited from the Carlos Tevez saga most. With Tevez, Aguero and Dzeko to contend with, Balotelli might have had limited game time and less opportunities to make up for his off field antics on the pitch. With Tevez about of the equation, he’s had a chance to shine and taken it brilliantly.

What about the other side of the coin though? What about United?

Well, with nineteen titles under their belt and an explosive start to the new season, you could have been forgiven for presuming a typical outcome of United in 1st place come what May.

Their noisy neighbours have thrown a spanner in the works though.

The case may still occur where United lose the battle, but end up winning the war, City haven’t won anything yet. But the manner of defeat is very significant.

If it had been by the odd goal, the margin of difference at the top would still be five points; but losing 6-1, at home, to your bitterest rivals must be crushing. Fergie has a lot to do to restore the United we know and hate.

You don’t hear it often, but you could argue Fergie was tactically naive against City. In the same was Arsene Wenger was when he visited Old Trafford, when you try to attack with ten men, you’re asking for trouble.

City will remember this result for a long time and will never let their neighbours forget what an embarrassment Sunday afternoon was for them, especially if they go on to win the league in May as well.

The result has prompted many typically witty jokes in reference to how Fergie must regret leaving out Howard Webb and I love them, not because the jokes are particularly imaginative, I just strongly dislike Man United. We all do, don’t we?

Although I can’t laugh too much because there is a saying about people in glass houses, especially ones that have lost 9-1 and 8-0 in the past.

But to quote David Beckham 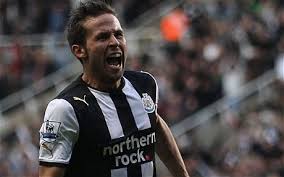 : “All that’s in the past, we’re in the future now.” And to St James’ park it was for a match against an unlikely top four contender, Newcastle United.

It was a ‘typical Wigan’ sort of game, play reasonably well but then concede late on and lose. If only I had a pound for every time…

Yohan Cabaye though is undoubtedly a class act and his goal proved it, as the weeks went by and each and every time commentators mentioned how he was still waiting for his first Newcastle goal, you just knew it would come against Wigan, didn’t you? Well I did anyway.

Alan Pardew to be fair to him has done a good job up in the North East, it looked like a mistake selling Kevin Nolan and not reinvesting the Andy Carroll money in certain areas but he’s got a hardworking team that on their day can challenge anyone.

Their organized and consistent back four is admirable and very desirable considering the state of our current back four. The midfield has a dynamic blend of hard work and flair, their only slight weakness would appear to be up front but Demba Ba is no Caleb Folan, it’s Ameobi and Best that there’s question marks over.

I doubt Newcastle will stay fourth for too long because of the sheer competition for that place, Liverpool and Tottenham look too strong but a European finish is definitely in reach. I have no shame losing to a good team in form away from home, especially when it’s just 1-0 and the performance improved a lot from previous weeks.

Having read that back, I sound just like Mr Martinez but I suppose that shows he has a point, it’s just starting to get alarming, all these consecutive defeats.

Yet it seems that every season in the Premier League (besides the first), we’ve gone through a run of losing six to eight games on the trot. We managed to stay up despite it in all of those seasons, so why not again?

To steal a very inventive line from Gary Lineker, I’ll see you all next week, Cabaye! (It must be the way he says them).

Goal of the Weekend: There were some great contenders, but I’ve narrowed it down to Royston Drenthe’s thunderbolt and Bryan Ruiz’s delicate chip, both during Fulham 1-3 Everton

Kevin Kilbane of the Week: It has to be Mario Balotelli simply for the aforementioned points, but David Silva was the star of the show and the best player in England at present.

Kevin Davies of the Week: Bobby Zamora will have nightmares about that miss against Everton in the last minute

Quote of the Week: “This is the worst defeat of my career, as a manager or a player.” Sir Alex Ferguson, I’ll drink to that!

Boselli Watch: In tribute to Wigan Athletic legend Julius Aghahowa, Boselli decided to celebrate a goal with a series of backflips. Unfortunately, the ‘goal’ was offside and he has a suspected broken leg following an awkward landing.