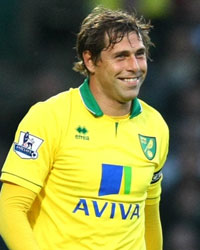 Norwich City striker Grant Holt is expected to be the latest player to join Owen Coyle at Wigan after the two clubs agreed a fee for the 32-year-old.

Holt joined Norwich in July 2009 in a £400,000 deal from Shrewsbury Town after scoring 28 goals in all competitions for The Shrews since his arrival from Nottingham Forest the previous summer.

In total he has made 168 appearances for The Canaries in four seasons at Carrow Road with 78 goals to his credit.

His goals helped Norwich earn a return to the top flight and Holt’s first taste of life in the Premier League ironically came on the opening day of the 2011-2013 season in a 1-1 draw with Wigan at the DW Stadium.

That game meant that he had played in all four divisions of the English Football League.

He went on to score 15 goals that season in the Premier League, second only to Wayne Rooney.

In March 2012 he was inducted into the Norwich City Hall of Fame but just two months later he had a transfer request turned down – six days after he had been voted Player of the Year by the Norwich fans for a third successive season.

He appeared determined to leave but went on to sign a new three-year deal to stay with the club and last season made was almost ever present in their league campaign, scoring eight goals as Norwich secured their place in the Premier League.

However Paul Lambert’s recent signing of Dutch striker Ricky van Wolfswinkel from Sporting Lisbon seems to have marked the end of Holt’s career at Norwich.

The Carlisle born player has also been muting that he desires a move back north with his family settled in Cumbria.

Holt is expected in Wigan to hold talks to agree personal terms before undergoing a medical and hopefully sign on the line to become Owen Coyle’s seventh signing since taking over as manager.