It was a heart-breaking night for everyone connected with Wigan Athletic Football Club as we came agonisingly close to overhauling a twelve point deduction for being plunged into administration after a final day draw with Fulham.

With news that Charlton were losing away at Leeds, a 32nd minute Kieffer Moore header had put is in the driving seat to achieve a miraculous escape , but after an appalling decision from referee John Brooks to not only penalise but to caution Joe Williams for a brilliant challenge on the edge of the area, Neesken Kebano curled a wonderful free kick past David Marshall to score the first goal by a visiting team since February 8th and confine us to League One.

A late Barnsley winner not only means that they are now safe pending our appeal, but also that a Sheffield Wednesday points deduction will not be enough to save us should our own appeal fail.

The manner of this relegation hurts and feels far worse than any of the others we have suffered previously. What has been allowed to happen to our great club is nothing short of a disgrace and if there truly is any justice then in a weeks time we will be celebrating getting our points back and finishing in our rightful finishing position of 13th. The cynic in me however is already looking at life back in the third tier. 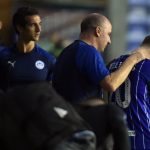 After the match, Paul Cook said that he and his players felt like they had let the fans down. Well I can categorically tell you Paul that you have done the complete opposite. We could not be prouder of you and we thank you for your efforts in battling to save this club.

The news yesterday that there is a buyer in place gives us all hope that we will get to see our club once again, but sadly we will never know if this side is able to kick on as no doubt several of them will move on over the next few weeks with some of the transfer funds received going towards keeping the club afloat and ensuring we don’t incur any further penalties as a result of administration.

It still feels surreal that this is the situation we are in and if I’m honest there is a lot of anger inside me at the moment that we are being punished for this and as someone on social media pointed out that despite finishing 13th we will be playing in a division below Wycombe Wanderers who finished 8th in League One  but were admitted to the playoffs on a PPG basis.  Had our season finished on a PPG basis we would have been safe.

The most important thing to come from all of this of course is that we still have a football club to support, but the anger will probably be felt by fans for a long time to come.

Stay safe everyone and see you next season.  Hopefully.  UP THE TICS!!