Wigan Athletic continued their return to football with another 2 – 0 win over local rivals Blackburn Rovers. Latics have now won 5 out of their last 6 games and are looking like a side that can not only beat the drop, but that will kick on next season to greater things.

We started off creating quite a few chances but were shocking in front of goal, with Moore, Lowe, Kipre and Pilkington wasting efforts at the Blackburn goal.

Luckily though the defence that had 5 consecutive clean sheets before this game, held firm at the back and Marshall was up to anything that was on target.

The game was very end to end throughout but having no shots on target in the first half meant we went into the break wondering how we were going to hit that breakthrough goal.

Samy Morsy was absolutely awesome, continuing the amazing season he was having before the world ground to a halt in March.

Blackburn were still harbouring hopes of making the play offs and would have come to the DW Stadium thinking we were there for the taking. To be fair they certainly give it a go, but like in the reverse fixture they lacked the quality to finish.

Latics made two substitutions in the second half, introducing Lee Evans and Michael Jacobs to sure up some heavy legs. Both were very active and took the game to Rovers knowing they were tiring too.

On the 80th minute Evans found the breakthrough, calmly waiting for the ball to come under control before rattling it in the net via the underside of the crossbar.

It was no more than we deserved, as although the visitors bossed the possession slightly, we dominated the stats everywhere else. 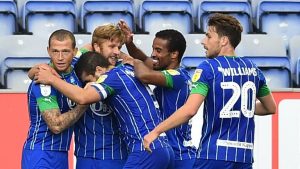 As Blackburn threw the kitchen sink at us in the final moments, Michael Jackobs had the last touch of the game to seal the win.

Blackburn were dispossessed on the edge of our penalty area and after a superb through ball, Crackers calmly gathered the ball, turned his defender and slammed the ball past ex-Latics keeper Christian Walton.

All in all a great win, putting us 5 points clear of safety even if it were played in an empty stadium.

We welcome Stoke City on Tuesday night and hopefully we can capitalise on there shaky run and extend that gap even more.