Never has a survival encounter been quite so dramatic, Latics travelled to Stoke aiming to ensure that it was the survival Sunday we dreamed of rather than the cynicism Sunday we feared.

Four games took place simultaneously, each with great consequences on the other, it was like a multi million point version of Jenga, sort of.

Wigan had 1,400 following supporters to cheer them on against the Stokeys who hadt their crown of ‘loudest Premier league fans’ taken off them recently after they lost their one remaining microphone.

Why there was only 1,400 tickets available I’m sure we’ve all been through 100 times. Yet never mind where you watched the game, it was edge of the seat (or sofa) stuff, for ninety minutes relentlessly.

Latics had spent more than 70% of the season in the bottom three, and more than an hour’s worth of the 90+ minutes on Sunday. Yet it wasn’t our final hour quite yet.

As the game started, Latics were undoubtedly nervous. Particularly at the back, Alcaraz and Caldwell made a few small errors. Including a pass back from the former which Ali Al Habsi just about cleared as it rolled past Kenwyne Jones’ outstretched toe. Wigan were getting lucky.

Just about dealing with Stoke’s set piece threat, Wigan were saved by the linesman who correctly called Jonathan Walter’s goal offside. Emmerson Boyce, my man of the match, then cleared one off the line as Latics clung on to their clean sheet.

It took 21 nervy minutes for the first of the four games to witness a goal, and it was at Old Trafford. Ji Sung Park had nipped in past Ian Evatt to poke past Matt Gilks, and potentially write himself into Wigan Athletic record books. Yet there was a long, long time to go.

One minute later, Molineaux saw a goal from a former Latic, Jason Roberts.

Scoring against one of his many former clubs, the Grenadan striker deflected home a Michel Salgado shot to put Wolves in a precarious position.

Sixteen minutes later, and they were two up, Brett Emerton’s sumptuous volley from 20 yards was enough to make Wolves fans feel the heat.

Just before half time, things took a massive twist.

Blackpool equalised at Old Trafford, remarkably, due to a Charlie Adam free kick. 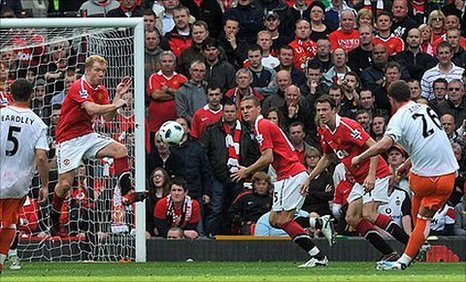 In my view, Van Der Sar should have kept it out. Had it kept them up at our expense, I’d have hired a hit man to ensure it was Van Der Sar’s last ever Premier league game. Oh wait, it already is.

Right on half time, Junior Hoilett jinked his way past three defenders before firing Rovers 3-0 up at Wolves. That was surely them safe, and with Blackpool winning, a 4 or 5 nil hammering by Blackburn could be our best hope of staying up.

At half time, we were down. Ourselves and Wolves would be joining West Ham in the second tier if things didn’t change, courtesy of just one goal. Just one.

Over to White Hart Lane, the Birmingham game had been relatively quiet. When you need teams to lose, no news tends to be bad news.

We were relying on Spurs, whose attack was handicapped considerably due to the absence of Rafael Van Der Vaart and Gareth Bale, to win the game.

Thankfully, substitute Roman Pavlyuchenko was on hand to curl a beauty past Ben Foster. 1-0.

Then, eight minutes later, disaster. Blackpool had taken the lead at Old Trafford, would it be like West Ham 2007 all over again?

Miraculously, it was Max, the bouncer from Phoenix Nights, who had scored his first ever professional goal in his 15 years as a striker. Gary Taylor-Fletcher to you and me.

This meant the unthinkable was half an hour away from happening, thankfully, Anderson popped up with an equaliser five minutes later, and normal service was resumed. Blackpool were level with Wigan on 40 points. Yet with United players desperate to make an impact for the a starting place at Wembley, it didn’t look good for Blackpool.

There was eleven minutes of silence where no goals went in, it was to be the calm before the storm…

At Molineaux, Jamie O’Hara dispatched a well worked free kick to score the most important consolation goal ever. Wolves were in the survival picture at 3-1.

A minute later, more unbelievable yet misleading news. Blackpool had scored again at Old Trafford to make it 3-2!

As true as this statement was, it was heartbreak for Blackpool instead of delight. Ian Evatt had put through his own net and the Tangerines were staring down the barrel of the gun.

Wigan had survived Stoke’s first half onslaught and came out for the second half all guns blazing.

After some chances went without punishing Stoke, Maynor Figueroa ran down the left, beat his man and stood up a cross that screamed ‘Head me in!’

Hugo Rodallega lost his marker and did just that. The sight of the net bulging being one of the greatest I can remember in a long time.

Wherever you were watching, I bet you were going crazy. 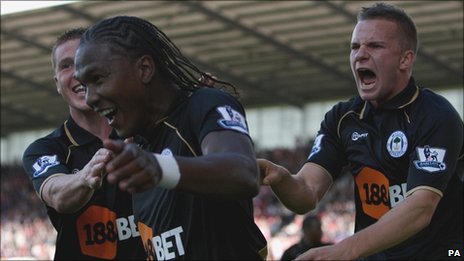 Twelve minutes until survival potentially, it was these three minutes that were the killer ones for Blackpool.

Birmingham threw a spanner in the works when Craig Gardner rifled in a left footed thunderbolt on 79 minutes, and two minutes later, it was all over for Blackpool.

Michael Owen, the forgotten man at Old Trafford, slotted in the goal which was the final nail in their coffin.

Us heartless Wiganers didn’t care though, all we wanted was survival.

Wolves wanted the same and Gardner’s goal meant they were going down and had ten minutes to save themselves.

Thankfully for big Mick, they did.

Stephen Hunt’s craft, a rose within thorns at Wolves, earned them a 3-2 defeat as he curled a delightful effort past Paul Robinson. Never have I seen a goal with such little outcome on the game’s result, have such great effect on the table.

Upon hearing this news, McLeish knew only a win would save his Blues. So he adopted the infamous ‘maybe if I throw my strikers up front they’ll turn into Pele’ approach. It didn’t work out though.

It only succeeded in creating a massive whole at the back for Spurs to break into, with Roman Pavlyuchenko driving the goal home that forced Birmingham down.

This meant even a draw would keep Wigan up, yet it is Wigan. A defeat from 1-0 up in five minutes of added time was easily possible.

Yet we held on despite closet Blackpool fan Andre Marriner’s best efforts with the five minutes of injury time, Wigan against all odds survived.

Looking back over the season, at the embarrassment at the hands of Blackpool, then the 6-0 loss against Chelsea; few would have backed us to end up here.

The relentless rollercoaster of elation, pain, cruelty and excitement has typified this Premier League season better than any other, and has led many fans close to insanity. As many board members are proof of.

For every winner though, there’s a loser. ‘Everyone’s favourite second team’ Blackpool will go down with those type of tedious comments that nobody wants. Yet it’s true, they’ve been a credit and will be badly missed.

As the banner at the Britannia read: ‘Wigan Athletic, staying up since 2005. Better than Viagra.’

To keep this analogy going, Blackpool were the hormonal teenager to Wigan’s experienced pulling machine.

Energetic, naive and exciting, Blackpool gave it a good go but ran out of steam too early and left their back door open on too many occasions (sorry, I had to throw that one in there).

Martinez rode his luck yet ended up victorious to prove the doubters wrong and keep the Latics ship afloat, despite the rick of a Titanic tear jerker.

After it all, we’re still in the top flight, and at this rate, there’ll be another similar dramatic day in just four years time.

See you in August.

Goal of the Weekend: Take your pick: Emerton’s volley, Gardner’s wonder strike, Hunt’s curler. Yet I’ll be biased and go for Hugo’s header.

Save of the Weekend: Paul Robinson to deny Steven Fletcher, Wolves 2-3 Blackburn

Blunder of the Weekend: Poor, poor Ian Evatt for his own goal. Man Utd 4-2 Blackpool

Other News: Chelsea have sacked Carlo Ancelotti after a disastrous season where they finished in lowly 2nd; Bolton came in a low 14th, just four points ahead of Wigan after a season mainly in the top eight; lethal marksmen Carlos Tevez, Johan Elmander and DJ Campbell are linked with moves away and finally, Roberto Martinez throws away his lucky jacket with his wallet still in it. Clever bunny.