On the eve of the 20/21 season I don’t think there has ever been a time previously when my excitement levels for the new season have been as low as they are right now. Not actually being able to attend games will of course have something to do with that because watching football (or any sport for that matter) on the TV is just dreadful and even more so with fake noise being piped in, but of course the main reason for my lack of excitement towards the new season is the heart-breaking events of the last few weeks and months.

I was losing interest in football slightly with the way the restart was handled anyway, but the lack of attention that our plight has received compared to the 24/7 news cycle (with people flown out to Barcelona during a global pandemic to cover it) regarding the supposed transfer of Lionel Messi, which was only ever going to end with him staying at Barcelona, was the final nail in the coffin.

Unless you’re one of the elite clubs, then nobody cares about you from the media right the way through to the actual governing body that is supposed to protect you.  I will never turn my back on Wigan Athletic Football Club but the sport itself can go forth and multiply.  I will watch Wigan Athletic and nobody else.  The less money I can give to the sport outside of our club the better, they don’t care because we are not one of the “elite”.  There have been 3 or 4 documentaries about the 30 year wait that Liverpool had for the title, and the return of “the mighty” Leeds United to the top flight, but aside from Colin Murray and a few podcasts there has been little to nothing about what has happened to ourselves and the other clubs outside the top flight who are being treated as play things by their owners and ripped apart.  Can you imagine there being this much silence should the Glazers decide tomorrow that they will no longer fund Manchester United and place them into administration along with their millions and millions of debt?  As I said, the sport can go and **** itself.

I’m not going to cover the administration too much here because it’s been discussed to death already, but if anyone actually thought that we would be seeing the likes of Kieffer Moore, Nathan Byrne, Samy Morsy, Cedric Kipre, Joe Williams and Antonee Robinson lining up in our first game of the new season in League One then they should probably put Football Manager away and come back into the real world.  These guys are Championship players (I may have disagreed with that at times last season, but they more than proved it after the turn of the year) who through no fault of their own have been relegated a division and forced to take a pay cut.  They were never ever going to stay at the club unless we were bought on day one by someone who instantly gave them a major pay rise to do so.

Of course, with a salary cap now in place we couldn’t have done that anyway.  The fact of the matter is, we need money and our only actual income stream with no fans allowed into stadiums is from the sale of these players.  It has led to us being able to pay creditors and more importantly to be able to pay the players themselves to ensure they can’t leave for free.  The fees we have received have been disgraceful in most instances, but we are not in a position in which we can bargain or can keep players sat in the stands that don’t wish to be here.  It is the stark reality of the position that we have been put into.  It’s difficult to look at it without emotion because football instantly brings out your emotions, but this is a situation that you cannot look at with emotion.  You have to look at it sensibly and almost from a neutral perspective otherwise it will drive you insane.  Anyway, that’s enough of the administration. 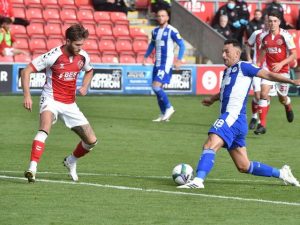 There have been a few marketing campaigns recently at the start of seasons about it being a new era for the club, but this truly is and is one that none of us will have seen before, aside perhaps from those fortunate enough to watch our first league season in 1978.  Our squad will be made up mainly of local lads, academy graduates and the odd experienced player like Gary Roberts.  We will more than likely lose more than we win and will be lucky if we spend more time out of the bottom four than we do in it.  Previously we may not have seen a win over a side like Rochdale (no disrespect to them intended) as a big thing because of our recent history, but it will become a huge win going forward.  Some of us have always believed that we are a League One club that has punched above its weight and this situation has shown that that is exactly what we were.  Our wage bill just wasn’t sustainable for a club with our income, but we had to try and compete against clubs two and three times our size, and even they are not financially sound.  Now we have been able to hit the reset button and start again, we are a League One club, back in League One but more importantly able to operate comfortably.  Or we will be once a buyer finally puts pen to paper.  The next task is to ensure we can compete comfortably, but with the new salary cap that shouldn’t be an issue once we are able to sign players again.

Our academy has taken great strides recently and I think that our performance at Old Trafford back in January was one of my proudest moments as a Latics fan.  Not just the following that we took which forced them to open more sections of the stadium, not once but twice, but the way we took the game to United and with a little bit of luck (and perhaps Joffy) could have actually won it.  These players are good players, and some of them will finally get their chance to showcase that as regular first teamers.  It isn’t the way we would have liked to introduce them of course, but we can be confident that they won’t let us down.  I’m actually looking forward to seeing players like Emeka Obi, Olly Crankshaw and Chris Merrie step up as I have always rated them when I have seen them in the academy, we just have to remember that they are still kids and they are still learning should we take a few hidings this season.  The usual Wigan reaction would be to get on their backs, but this season we just cannot do that.  We have to accept that this will be a long, tough season and the chances are we will probably be relegated at the end of it.  Survival would probably better anything we have seen recently, all things considered.

We laughed at Bolton last season when they were hit for 7 at Accrington or 5 at Tranmere, but as the season went on their results improved and I expect we will be somewhere similar.  I don’t expect us to start the season well (I think Ipswich will take us apart on Sunday) but hopefully we can grow into it early enough to be able to battle against the drop.   Our first half display last week against Fleetwood was superb but we were well beaten in the second.  That will probably be the way our season will pan out, we just have to hope we can hold on to a lead more often than we did last season. If we can have a season in which we suffer little to no injuries or suspensions and can play our strongest XI more often than not, then that will be a big step towards trying to compete.

I’ll be honest, I have no idea what to expect but provided we complete all 46 games and finish the season in a better position off the field than we are at currently then I don’t think we can have too many complaints.  The EFL allowing us to start indicates that we are confident, as are they, that we can also finish the season as they will not want another situation in which the league is cut to 23 teams and they have to make changes to promotion and relegation.  That in itself can only be a positive that after probably the worst off-season in the history of the club, there will still be a club next season.