Wigan Council show their true colours again, and there is no blue 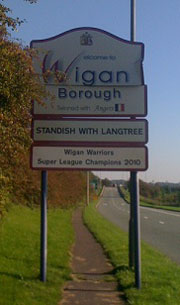 25 years ago Wigan Council very firmly nailed their colours to the mast and nearly helped put Wigan Athletic out of business, as of this weekend they have now started in their quest to once again try and get rid of the football team’s identity.

There has been a lot of pent up aggression towards Wigan Council, Maurice Lindsey and the old board, team and fans of Wigan Rugby League Football Club after their futile attempts all those years ago to try and put Wigan Athletic out of business.

That might be a bit strong, but they certainly didn’t jump up and be counted in our hour of need and they didn’t help us thrive, that is a fact. To the contrary, when we were struggling to pay wages they all were in their ivory towers pretending we didn’t exist, or should I say wishing we didin’t exist.

Now, low and behold, the Souper duper Rugby team in the town has only gone and won a trophy and less than a week later what do the council action – taking down the ‘home of Premier league Football and Super League’, to be replaced by ‘Super League Champions 2010’.

If there was any headway being made in relations between the two codes, the powers that be have just put them back 25 years and for what? Is this trophy triumph going to bring any more tourism or money to the town? No, because outside of the tiny Rugby League world, nobody even knows that it happened.

This is a disgrace, but at least we know exactly where the Council stand again, I can’t believe we nearly thought they had moved on with the times. They were quite happy to jump on the Premier League band wagon when it suited weren’t they.

Well done WMBC, you have yet again alienated the town again, I hope all those supporters from Leyland, Preston, Bolton and Chorley love their new sign, because the majority of the Wigan sporting public are appalled.