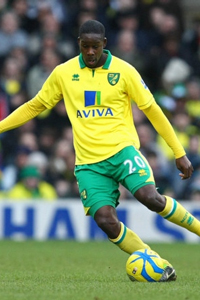 Wigan Athletic have completed the signing of 27-year-old defender Leon Barnett from Norwich City on a three-year deal for a fee rumoured to be around the £500,000 mark.

Barnett successfully underwent a medical at the DW Stadium before signing on the dotted line to become Owen Coyle’s ninth recruit of the summer transfer window.

Speaking of his latest acquisition Coyle said: “As manager, to see the desire Leon has to play for Wigan Athletic is tremendous and we’re all delighted to have enticed a player of his calibre to our club.

“He has shown his qualities in the Premier League on numerous occasions and has the experience of being successful in a division as tough as the Championship, winning promotion on three separate occasions.

“That kind of experience for someone who is still only 27 years old is fantastic, and I believe that whilst he has much maturity in his play he also has huge potential to become an even better player here at Wigan Athletic.”

Barnett joins the club after three years spent at Carrow Road, having signed for Norwich at the end of August 2010 initially on loan until January 2011 from West Bromwich Albion before making the move permanent at the end of the loan spell.

The centre-half made a total of 55 appearances for the Canaries, scoring on three occassions.

He has been handed the number 25 shirt and joins former Canaries team mate Grant Holt in the Wigan side.