Wigan Secure, But Could Have Done Better Says Morsy 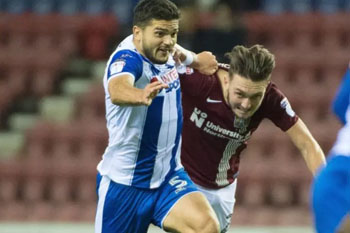 Whatever happened in the last few games of the season, Wigan ensured that they will remain in the Championship and safely away from the relegation zone.

But despite the seemingly safe finish, skipper Sam Morsy says the team left a lot of points unclaimed throughout the seaosn as freetips.com reports.

Taking four points against Leeds and Norwich who are top of the top ranking teams in the division is no mean feat, and Morsy says that the achievement should never be underestimated as they took on sides way out of their league with vastly differing budgets. He also admitted that there were times that the team could have done better but, overall was happy with the season and the safe position they now find themselves in.

“Yes we’ve thrown away a lot of points this year, and we should be even higher in the table. But at the same time, some of the biggest clubs in the land have been unable to get out of this division for a number of years. Fair play to the lads, the staff, the fans, everyone for sticking together. We all believed we could hold our own at this level, even when we got ourselves into a bit of trouble. Hand on heart, I honestly didn’t ever have any doubts we wouldn’t get ourselves safe.

There was maybe one time, about a month ago, I found myself watching the scores from elsewhere come in, and I found myself cheering a goal against Rotherham. I thought to myself: ‘I can’t believe this is happening!’ It took us until the games against Norwich and Leeds to prove how good a side we are. And credit to the gaffer for keeping us so positive, and believing we were good enough to take on teams like that. What we have to do now is learn from the mistakes we’ve made this year and come back stronger. Because we know we should have finished even higher in the table – we’ve left a lot of points out there.”

It happened on the May Bank Holiday Monday, May the 6th and is supported by Wigan Council. Players were on hand for photo opportunities with fans, and they also did a meeting and greeting the supporters during the afternoon. On the main stage, there was a Q&A session with manager Paul Cook, chairman Darren Royle and other staff and players. It wasn’t all just about the football, it ended up a great family day out with entertainment and a range of food and drink stalls, the event is geared for families.