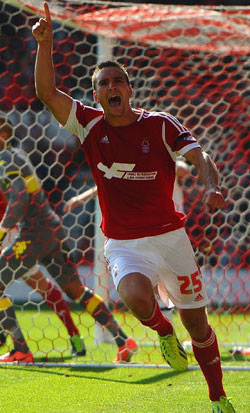 Latics are reportedly running the rule over Hull City defender Jack Hobbs who is currently on a season long loan with Championship rivals Nottingham Forest.

Ex-Latics manager Steve Bruce revealed over the weekend that Wigan had made a ‘firm enquiry’ for the 25-year-old former Liverpool trainee.

Hobbs had been expected to join Forest permanently at the end of the current season when his contract at the KC Stadium expire and has apparently agreed, in principle, to do so.

However Bruce may prefer to cash in on him now with rumours coming out of East Yorkshire suggesting that Hobbs could be used as a bargaining chip to take Jean Beausejour the other way.

The Chile international joined Wigan from Birmingham City at the end of January 2012, signing a 2½ year contract and it is reported that the 29-year-old is reluctant to sign a new deal at the DW Stadium so a player exchange deal could prove to be a favourable option for both parties – but that remains to be seen.

Bruce spoke to Radio Humberside on Saturday with regards to his player saying : “We have had a firm enquiry from Wigan concerning Hobbs – that’s on the agenda.

“There’s one or two others sniffing around, I’ve had one or two phone calls regarding Jack. We’ll obviously see what he wants to do and see what happens in the next few weeks with that.”

However Forest would not be happy for any deal to go ahead as they believe that they have an agreement with Hobbs and also that he is their player until the end of the season barring any recall from Hull themselves.

Forest manager Billy Davies was quizzed about the situation following his side’s 5-0 demolition of West Ham in the FA Cup and asked if Hobbs had played his final game for the club replied: “Not a chance. There is a recall clause which is for an emergency. As far as we’re concerned that hasn’t changed.

“He’s still our player. We’re looking forward to having him here for the rest of the season if that’s possible.

“The player doesn’t want to leave this club and that’s important.”

Hobbs has made 26 appearances for Forest so far this season and scored the only goal of the game against bitter rivals Derby County at the end of September.