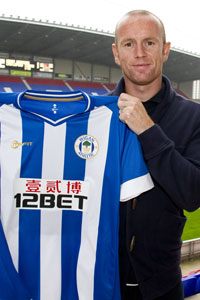 Blackpool’s Stephen Crainey has become Owen Coyle’s second signing for Wigan after agreeing to a one-year contract at the DW Stadium.

The Scotland international arrives on a free transfer after six years at Bloomfield Road and joins Chris McCann in the list of new recruits at the club.

Born in Glasgow Crainey joined Celtic as a youth in 1997 and made his professional debut for the club as a 77th minute substitute in a 4-1 win over St. Johnstone at Celtic Park in March 2000.

On the bench for Celtic that afternoon was former Wigan keeper Stewart Kerr and Mark Burchill, who spent a short time on loan with Wigan, played up front and scored twice for the Bhoys. Latics’ assistant manager Graeme Jones was an unused substituted for the opposition.

Crainey joined Premiership side Southampton in February 2004 after making 58 appearances for Celtic but his time at St. Mary’s saw him make only 5 appearances and he joined Leeds United shortly after the start of the following season for a fee of £200,000.

He spent the next three seasons at Elland Road, making 62 appearances, before Simon Grayson snapped him up on a free transfer for Blackpool.

During his six seasons with The Tangerines he made 231 appearances, scored 4 goals, earned promotion to the Premier League via the play-offs against Cardiff City in 2010, and almost did it again two years later but eventually went down to a late Vaz Te goal against West Ham.

After passing his medical the 32-year-old said: “It’s a big challenge for me personally, but after six good years at Blackpool I felt it was time for a new challenge at this stage of my career and I’m delighted for that be at Wigan Athletic.

“The Championship is a gruelling division, with tough games every week, but that and the chance to play European football, is a challenge I’m really looking forward to.

“I’ve played against Wigan Athletic on a few occasions so I know how much the fans back their team and I’m sure they’ll do the same this season which is what we need to produce the performances on the pitch.”