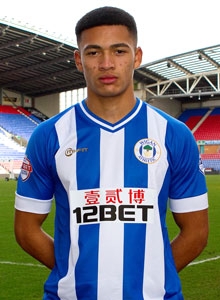 Uwe Rosler has made his first signing of the January transfer window with Everton defender Tyias Browning arriving on a month long loan.

Liverpool born Browning joined Everton as a junior in 2004 and has impressed at the club ever since.

He appeared a few times for the Everton U18 side during the 2009/10 season whilst a 15-year-old schoolboy.

Tyias was also selected by former Wigan manager Kenny Swain to represent England U17s for the annual Nordic Tournament that took place in Finland in August 2010.

Swain’s youngsters won the tournament, winning all three of their games and Browning completed each one of them.

The following season saw him make it into Everton’s FA Youth Cup squad and also saw the U18’s side win, with Browning an integral part of it, the national title and weeks later the young defender was awarded a professional contract at the club

He featured more than any other player in U21/Reserves last season, making 28 appearances for Alan Stubbs’ side and has continued that into this season.

Browning has yet to feature for the first team for the Merseyside club but was named among David Moyes’ substitutes for the Premier League game against Chelsea at Goodison Park in December 2012.

Browning was called into Noel Blake’s U19 squad in March 2013, making his debut in their 1-0 win at Telford’s New Bucks Head Stadium against Turkey.

Despite representing England at both U17 and U19 level he qualifies for and could still opt to play for China.

He should feel right at home at the DW Stadium having been to Cardinal Heenan Catholic High School in West Derby (the same school that Steven Gerrard attended) with both Lee Nicholls and Jack Phillips of the development squad.

He is very highly regarded at Goodison Park and was handed a new two-year deal last July.

Browning was handed the number 31 shirt for his time with Wigan.