Will Garner’s Goal at Bramall Lane Ignite His Season? 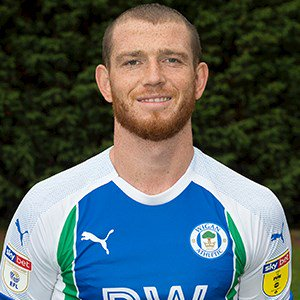 Although Latics fell to a disappointing 4-2 defeat at the hands of Sheffield United on Saturday, the one positive to come out of the loss was a goal for experienced frontman, Joe Garner.

The former Ipswich and Glasgow Rangers ace was signed for £1.25 million on August’s transfer deadline day but has so far flattered to deceive in a Latics shirt. Although this has been largely due to the performances of Will Grigg, Michael Jacobs and fellow new-boy, Josh Windass, Garner has shown little in his substitute cameo appearances to suggest that the £1.25 million was money well spent.

Garner’s move back to the north-west of England was engineered by the 30-year-old who wanted to live closer to his young family. His departure from Ipswich disappointed many Tractor Boys, who enjoyed his swashbuckling displays alongside Martyn Waghorn last term.

Last season’s figures look all the more impressive for Garner given that he was thought to have been playing with a shoulder injury for much of last season – an injury that eventually required surgery earlier this year.

How Garner has drifted from a prolific talisman for the Tractor Boys to something of a non-entity in a Latics shirt remains a mystery.

In fact, some Latics supporters have even called for a senior call-up for promising teen, Joe Gelhardt ahead of Garner, in the recent absence of Grigg through injury. Is the reason that many Latics fans have struggled to warm to Garner because he has been misunderstood as a footballer?

Although the 30-year-old has enjoyed an impressive playing career to date, Garner has never been a prolific 20-goal-a-season front man. Even at Ipswich last season, he only averaged one-in-three games.

It was his three-year spell at Preston North End that proved to be his most prolific spell to date, scoring 49 goals in 129 appearances in a Lilywhites shirt. Even then, he averaged less than a goal every two games.

What Latics fans need to understand is that there is so much more to Garner’s game than scoring goals. He’s a constant menace, a real pest for Championship defenders to contend with. If he’s not standing on their toes, he’s having a chirp in his marker’s ear.

It’s that kind of bulldog spirit that Wigan Athletic need if they are to remain clear of relegation trouble this campaign. Although Latics are only a handful of points off the top six at present, a few bad results could easily see us sucked into the relegation mire. Still, we are best-priced at 25/1 in the Championship betting for relegation, so pundits still feel the team have plenty in the tank to avoid the drop.

With Will Grigg’s hamstring continuing to cause the Northern Irishman some cause for concern, a fit and firing Joe Garner should be a more than able deputy.

The Lancastrian is someone that needs to feel loved and appreciated both by the fans and the management staff. Paul Cook is certainly a boss capable of putting an arm around a player when they need it and there is still every chance that the DW Stadium could yet be a happy hunting ground for Garner this campaign.