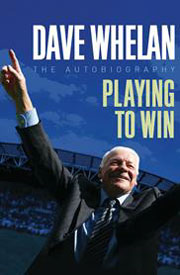 “Playing to win” is the new book out by Dave Whelan, an autobiography of the man that took Latics from division four to the Premier League.

The fantastic new book depicting the life, achievement and ambitions of Latics chairman Dave Whelan, is now out for sale in all good book shops around Wigan and the UK.

The opening pages are written by ex-Latics manager Steve Bruce who gives an insight to the passion Mr. Whelan has for the game of football and for the town of Wigan.

Dave Whelan then lets us into how his struggling family got by in war torn England, how he met his father for the first time and how his love of football led him to sign for Blackburn Rovers

It then goes into the life of a man whose worst point in life turned out to be the drive for him to set up a business empire and to ultimately take Wigan Athletic up to the Top Flight. How he took on the lawyers for Boots single handedly before striking a deal with Ken Morrison for his market stall – in a urinal.

The book is a fantastic insight into our illustrious chairman and we are lucky enough to have a copy to give away in a prise competition. As usual, all you need to do is email the correct answer to this question:

What team did Latics play and what was the score in the first football match to be played at the then JJB Stadium back on August 1st 1999?

Only Emailed answers will be accepted and the winner will be picked from the winning entries received by the closing date of midnight Friday 25th September 2009 ; the email address is editor@cockneylatic.co.uk

Such is the generosity of Mr. Whelan, he won’t be making a penny out of the sale of this book, as all profits will be going to the ‘Wigan Boys and Girls Club’.