Win executive box tickets for the home game against Bolton 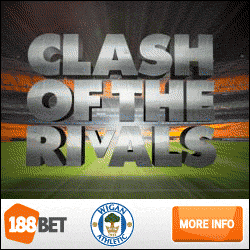 Latics’ main shirt sponsors 188BET are giving you the chance to win exclusive VIP tickets to the game against near rivals Bolton Wanderers on the 23rd October 2010. Don’t miss your chance to get an exclusive FREE £25 bet and place yourself in the draw for the Exec Box tickets with meal and the trimmings.

188BET is Latics main shirt sponsor, and as such usually give better odds for games including Latics giving you more of a return for your bets. If betting is something you do, why not try out 188BET, and for this week only every new registrant will be entered into a draw to win VIP tickets to the Bolton game at the DW Stadium on the 23rd October.

That means the winner and a guest will be able to have a three course meal, waitress service and executive seats just for registering and having a bet with our main sponsors.

188BET have invested a lot of money in the UK, they have even built a site just for the UK Market as we differ so much from the rest of the world. With 188BET your first bet (up to £25) will be free by registering after following links from here, you can see the site by clicking the logo or HERE.

188BET Standard Terms Applicable to Promotions
The following are the terms and conditions of the Promotion (“the Promotion”) as organised by the operator (“Cube”). All 188BET websites such as www.en.188bet.com (“the Site”). By entering the competition players shall be deemed to accept the terms and conditions herein.
The promoter in respect of any Promotion is Cube Limited whose registered office is Clinch’s House, Lord Street, Douglas, Isle of Man IM1 1JD.
Specific Terms
New Customers
1. Everyone who registers an account and stakes a total amount at least £30 at www.en.188bet.com via www.188promo.com/rivals between Friday 10th September 2010 and Sunday 26th September 2010 will be entered into a prize draw to win two VIP hospitality places at a derby fixture of their choice concerning either Chelsea vs Arsenal, Everton vs Liverpool, Wigan vs Bolton, Villa vs Birmingham.
2. The first settled bet on your account is the qualifying bet.
3. Winners will receive a telephone call from 188BET asking them to state their preference of fixture.
4. Each hospitality box has a limited number of spaces, so will be drawn on a first come first serve basis.
5. Three runners-up will receive two general admission tickets to a derby fixture of their choice.
6. To get your free bet, email promo@188bet.com with your User Name, the Bet ID, and Promotion Code ‘rivals’
7. All aspects of this promotion are only available to new 188BET customers based in the UK
8. Qualifying bets must be placed in Sportsbook after registering your new 188BET account.
9. If your first settled bet is a losing bet, your 188BET account will be credited with your losing stake up to a value of £25 / €30. Winning bets are not eligible for this promotion.
10. Your account will be credited within 7 days of your claim.
11. Winners will be sent their tickets by recorded delivery. Full instructions will be communicated via 188BET.
12. Start Date: 10th September 2010 (GMT+1 00:00)
13. End Date: 26th September 2010 (GMT+1 23:59)

Existing Customers
1. Every existing customer who stakes at least £30 on www.en.188bet.com between Friday 10th September 2010 and Sunday 26th September 2010 will be entered into a prize draw to win two VIP hospitality places at a derby fixture of their choice concerning either Chelsea vs Arsenal, Everton vs Liverpool, Wigan vs Bolton, Villa vs Birmingham.
2. Each hospitality box has a limited number of spaces, so will be drawn on a first come first serve basis.
3. Three runners-up will receive two general admission tickets to a derby fixture of their choice.
4. Winners will receive a telephone call from 188BET asking them to state their preference of fixture.
5. This promotional offer cannot be used in conjunction with any other offer concerning 188BET.
6. Winners will be sent their tickets by recorded delivery. Full instructions will be communicated via 188BET.
7. All aspects of this promotion are only available to existing 188BET customers based in the UK
8. Start Date: 10th September 2010 (GMT+1 00:00)
9. End Date: 26th September 2010 (GMT+1 23:59)

“Settled” means a bet that has been fully accepted by 188BET in a market that has been settled on a result with all due winnings paid out.
* Your risk is the amount of your stake.
Standard Terms
1. Players must be at least 18 years of age or over the age of majority in their jurisdiction (whichever is the greater) to bet or participate in the Promotion. Underage entry will be void. Players may be asked at any stage to provide Cube, or a third party with proof of age and/or identity. All players must be able to present a valid passport or other valid picture ID to verify their age and/or identity. Any player unable to provide such proof of age will be excluded.
2. By participating in the Promotion, players agree to Cube using their name, likeness and image on the Site and in marketing and promotion campaigns produced by or on behalf of Cube in any media whatsoever without further compensation and you expressly waive any claims against Cube in this regard.
3. Players hereby assign any and all copyright and other intellectual property rights in their entry to the Promotion for Cube’s unrestricted usage and agree to do all such acts and/or execute or procure the execution of all such documents in a form reasonably satisfactory to Cube to confirm Cube’s ownership of such rights.
4. During the Promotion, strict rules regarding multiple account abuse will be enforced. Cube reserves the right to disqualify from the Promotion and/or the Site any player suspected of entering more than one account in the Promotion. The decision on what activity constitutes multiple account abuse lies with Cube’s management in its sole discretion.
5. Fraudulent, multiple or incorrectly completed entries will not be accepted, neither will entries made in breach or non-compliance with these terms and conditions. No liability is accepted for entries that are not received for any reason by Cube.
6. Employees and relatives of employees of Cube and any entities affiliated or related to Cube are not permitted to participate in the Promotion. For these purposes “relative” shall mean spouse, partner, parent, child or sibling.
7. By participating in the Promotion, each entrant agrees to release, discharge and hold harmless Cube, their legal representatives, their affiliates, subsidiaries, agencies and their respective officers, directors, employees and agents from any damage incurred or losses suffered or sustained in connection with the acceptance of any prizes and/or the participation in the Promotion.
8. Any bonuses and winnings are non-transferable to other accounts [save in the sole discretion of Cube]. The award of any bonuses and winnings are subject to the sole discretion of Cube.
9. You should not enter this Promotion if you are not legally able to accept the prize (whether by virtue of a football banning order or otherwise) By entering this Promotion you give permission to share your information for the purpose of verifying. Any entries in breach of this condition will be invalid.
10. By participating in the Promotion players confirm that the name and address which are registered in their account are correct and up to date. Failure to provide this information may lead to disqualification from the Promotion.
11. During the Promotion strict rules regarding player behaviour will be enforced. Cube reserves the right to take action if it believes a player is engaging in any fraudulent or illegal activity (including participation that would be a beach in the local law of their jurisdiction) and to take action against any player found to be abusing any aspect of the Promotion. Such action includes, but is not limited to, exclusion or suspension from the Site, and the confiscation of rewards earned as a result of the abuse. The decision on what activity constitutes abuse of the Promotion lies with Cube management in its sole discretion.
12. Only approved deposits where the necessary verifications are completed will constitute entitlement to the deposit bonus.
13. Cube reserves the right, at any time, to alter these terms and conditions at its sole discretion including cancelling, modifying or suspending the Promotion if Cube believes that the Promotion is not capable of being conducted as specified.
14. All players participating in the Promotion must abide by all Cube rules, as well as the general Terms and Conditions listed on the Site.
15. In the event of a breach of these terms and conditions Cube reserves the right to take such action as it deems appropriate in its absolute discretion.
16. In the case of disputes concerning the participation rights of players in the Promotion, all matters relating to the awarding of the prizes and/or the terms and conditions, the final decision lies with Cube’s management. The decision will be binding and shall not be subject to review or appeal by any player or third party.
17. These terms and conditions and matters relating hereto shall be governed by, and construed, in accordance with Isle of Man law and shall be subject to the exclusive jurisdiction of the Isle of Man Courts.

Click here to go to the all new 188BET site.