Now we’ve reached mid-January, the transfer window is in full swing and that means more outrageous transfer fantasies from the Sun with every day that passes. As a Wigan fan, it’s a bit like waiting for Santa, what you want never seems to come around quickly.

Many people have criticised the January transfer window in the past, and not just fans and journalists either, managers have often been very honest in their opinions about the mid-season window.

This is for good reason too. Firstly, the prices of players seem to vastly inflate during January compared to the summer. As player contracts generally expire in the summer, the only way to add to your squad is to spend. If a player has been performing well for the first half of the season and is central to a team’s success, why should they let him go on the cheap? The risk of selling in January, even if you manage to get replacements in, is colossal. New signings take time to bed in and without a pre-season to do it in, it can be difficult to maintain results. There’s no greater example of this than the January 2009 window when Wigan lost Wilson Palacios and Emile Heskey. Replacements Mido, Hugo Rodallega, Ben Watson and Charles N’Zogbia came in but the team’s form declined dramatically, especially after survival was ensured in March. The anonymity of ‘Real Madrid’ bound Amr Zaki during this period didn’t help either, but that’s another matter. 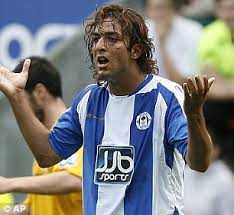 The fact that most of the successful clubs, even with their massive budgets, don’t send excessively in January suggests it’s not the right time to install the revolving door. Man City tried it in 2009 after the arrival of their Billionaires by signing Craig Bellamy, Shay Given, Nigel De Jong and Patrick Vieira, but it had little effect on their league position as they ended the season in ninth place after being in eleventh at the end of January.

The most successful club since the advent of the January market in 2003, Manchester United, have used the window sparingly. Surprisingly though, Nemanja Vidic and Patrice Evra were both singed in January 2006 and have gone on to be very successful players. This is despite their shaky starts at Old Trafford, particularly Evra, who made his debut at Eastlands and was infamously hauled off at half time during a 3-1 defeat, we are now reminded of this without fail by commentators at every Manchester derby.

It’s clear then that managers prefer to have their squad completed in the summer, Ferguson even tries to finish his spending at the start of the summer, so his new players have a whole pre-season to settle in and adapt to the team’s philosophy. January transfers then, tend to be emergency deals when clubs are in trouble, although this isn’t always the case. David Moyes acquired both Darron Gibson and Nikica Jelavic in last winter’s window, and they have both turned out to be successful signings that didn’t have desperation about them. You only have to look at the £50million signing of Fernando Torres and the £35million purchase of Andy Carroll by Chelsea and Liverpool in 2011 respectively though to see why clubs are sceptical about January buys.

In terms of the Latics, I don’t think we’ve been particularly amazing in January windows, the priority is often to keep hold of our key players. That may be the case once more as Everton and Arsenal reportedly sniff around James McCarthy. In terms of January signings though, spectacular ones have been a rarity. Wilson Palacios was a revelation in midfield following his £1million move from Olimpia in 2008, and the permanent signing of Antonio Valencia in the same window also proved to be a sound investment at just £2.5million. Come what summer 2009, both had been sold for a combined revenue of £31million. Charles N’Zogbia too turned out to be a key player for us but it wasn’t until his first full season (2009-10) that we really saw the best of him, the same could be said for Hugo Rodallega. In the second half of the 2008-09 season both needed time to settle in, although that didn’t stop Charles from scoring a Ryan Giggs-esque goal against Sunderland with a mazy dribble mind.

Clearly, the main target is to avoid panic buys. Obviously, these aren’t helpful at any time but when a team is fighting relegation, they’re even more useless, especially if they’ve taken up a large amount of the transfer budget.

Martinez has been quoted saying he’d like to add one more outfield player, but the injury to Ivan Ramis on Saturday has led him to suggest he may dip into the market for another centre half, especially as there’s no guarantee Antolin Alcaraz will be back soon as he continues to suffer from the mother of all groin strains.

In terms of centre backs, I’m not sure they’re easy to find. Picking up players from the Championship can be risky, as we’ve seen from Jason Koumas and co in the past. Having said that, buying Premier League players isn’t a risk free strategy either, the so-called ‘solid’ pairing of Birmingham City’s Roger Johnson and Scott Dann were picked up by Wolves and Blackburn respectively and both ended up getting relegated at the end of last season. I’m sure situations like this are what Roberto’s knowledge of the Spanish leagues are for.

As for the other player Martinez has mentioned, I’d like to see him take a risk on a striker. I know he’s signed Henriquez from United and Kone is only gone for a month or so but a good striker is always an excellent investment as goals are invaluable. Some on the message board have suggested Danny Graham (inset), and I think he’d be an excellent signing. Of course there’s no guarantee he’ll succeed but he’s hungry for game time and is used to a similar style of play to ours at Swansea. In the last 18 months he’s been scoring goals at a reasonable rate (more frequently than any striker on our books anyway) and I doubt he’s on crazy wages at Swansea. I think £3.5million would be enough to snap him up, but would Swansea want to sell without a replacement lined up, indeed, would they want to sell him at all?

Whoever Roberto does go for, I’m glad he’s been fairly methodological about his approach and isn’t just throwing money at everyone who becomes available (not that Whelan would allow him to anyway). Whoever he does sign though, let’s be glad we’re not signing the world beaters our rivals QPR and Reading are in Tal Ben Haim and Stephen Kelly respectively.