Are you Wigan in disguise? 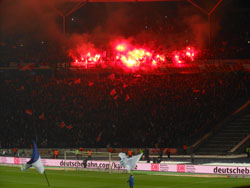 Reading the various comments on the message board about whether we would be better off being relegated, I thought I’d have a look at what second tier football is actually like. So on Monday evening I went to watch a second level game.

The team in blue and white stripes had lots of possession, had moves that broke down in the final third, had hardly had any shots on target in most of the game, went 2-0 down before they woke up and started a fight back to gain a point, with comedy defending to blame for the goals conceded.

Were they Wigan in disguise – and not very good disguise at that? Actually they were Hertha Berlin, and the game was a 2-Bundesliga derby against Union Berlin. It was a sell-out in the Olympiastadion (74,244) with an atmosphere that every Premier League club would die for. And I include Newcastle, and Sunderland, and certainly Man U and Liverpool’s “famous (but non-existent) atmosphere”.

There was a wall of noise from both ends, flares in the Union stands (I know that flares are out of fashion – but they do come from the old East Germany), complete with flags, banners and the whole Hertha end (the Ostkurve – roughly translated as the East Stand) giving full belt from an hour before kick-off.

But there were huge differences too. You could smoke in the seats – although very few did. You could bring your beer into the stand; not just that but they bring beer round for sale. While both sets of fans had their “ends”, in the rest of the ground Union fans were in amongst the Hertha fans, and jumped up and cheered wildly when they scored. And no-one batted an eyelid. We certainly have a lot to learn, in terms of behaviour. It’s no good saying we should allow beer in the stands here, because the mentality was just different (and I know about the rugby etc etc). People were even leaving the game after final whistle with some beer still in their glass!

And then there’s the chanting and singing. The best bit of course is the naming the teams. Every Union name was greeted by 50,000 shouting “who?” Then the Hertha team. It’s the thing you’ve heard on TV – they announce the number and first name, and everyone shouts the surname. It could only work at Wigan if a few players changed their names to something more familiar. “Number 14, Kinell” – “GOMEZ!”. Hertha’s star, who scored a screaming free kick is Ronny. Which led after the goal to a three times repeated “Nummer zwolf” – “RONNY!” I don’t think Mr Stam would get the same reception – or in fact score a screaming free kick come to think of it.

Union fans played their part too, and while they are a great little club (who have chosen to play in the backyard of… oh no, hang on) their name in German is pronounced like the English word “onion”. It’s hard to take seriously fans who sing enthusiastically a sort of bouncing “Der der der” song but end with a shout of “Onion!”. Maybe Griff could do a “5 football teams named after vegetables”? I can only think of P(ea)-SV and Leek Town offhand, but I’m sure there’s others.

The Olympiastadion itself is stunning with its memories of the 1936 Olympics subtly placed alongside its role as a modern big stadium. Tickets were 38 euros and easily obtainable online (well, they were a few months back).

I could go on about how good a trip it was – thank God for Easy Jet. Site seeing was brilliant. The city is so full of thought-provoking history – the Reichstag, the bits of the Wall that remain but still leave scars among many many others. The rail system is Teutonic in its efficiency (state-run of course). But I’ll leave that to bore my Facebook friends with. If you ever get the urge to see a match abroad, don’t just think about Barca or Real. Hertha is a good one. And what’s more I can confirm this second tier football isn’t too bad after all.