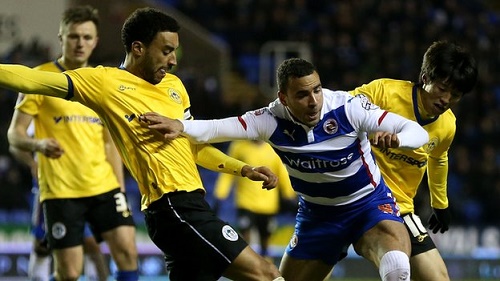 Latics secure their 5th win of the season and only their second under Malky Mackay and debutant Jason Pearce was the man to separate the sides at the Madejski Stadium.

Leon Clarke could have left Adam Federici red faced after being caught on the ball but the Wolves man couldn’t capitalise.

Federici was made to pay this time as he fumbled Clarke’s header where Pearce poked home the rebound.

Reading had their chances in front of goal but Ali Al-Habsi denied efforts from Gareth McCleary and Nathaniel Chalobah.

Wigan nearly made it 2 but Alex Pearce’s goal line clearance kept the deficit at just 1.

Reports prior to the game suggested that time was running out for Malky Mackay and he had this game to keep his job as his side were desperate for the win and their performance suggested that.

Leon Clarke nearly put the visitors up and he caught Adam Federici on the ball where the Aussie was trying to be smart but the Reading shot stopper managed to put Clarke under enough pressure to get in the way of his shot and allow his side to regroup.

It was from that subsequent corner that Wigan took a well deserved lead. James McClean’s delivery was met by Clarke who forced a poor save from Federici that fell to the feet of Jason Pearce where the former Leeds defender poked home for the only goal of the game.

It was now Reading’s turn and Ali Al Habsi was called into action as he tipped Chalobah’s header over the bar from Oliver Norwood’s corner.

Billy McKay fizzed an effort over the bar before Jordan Obita was nearly left red faced as he looked to have turned James McClean’s cross into his own net if it wasn’t for Alex Pearce who hacked the ball off the line to prevent a second.

Malky Mackay: “It was a thoroughly deserved win against a very good team. To win and to win the way we did, I was really delighted.

“It’s a brand new group I’ve got now. Twelve players have left and eight have come in in the last three weeks.

“I’m now looking at some real warriors there now. The gap has closed and there’s still a lot of points to play for. That group of players certainly don’t look as though they’re down and out.”

6 points away from safety now looks a lot better than 9 and tt certainly looked to be a massive improvement on recent weeks in terms of performance and which will encourage many people associated with the club going into the games in the next few weeks.

One thing’s for sure, there’s never a dull moment at Wigan Athletic.