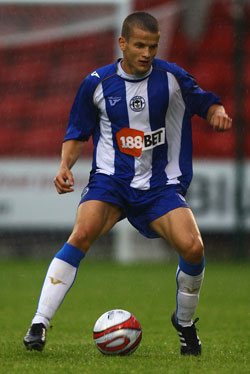 Young Polish striker Thomasz Cywka has joined Derby County on loan until the end of the season in an attempt to break through into the Wigan Athletic first team.

Roberto has decided to let the young Pole go on loan to help him fulfil his potential and be in the frame for Latics first team next season. The talented 21 year old will more than likely go straight into the Rams team that will play Leicester on Saturday.

Bobby has no doubt that the lad oozes talent but he wants him to gain some much needed experience in the Championship. He has been restricted to just two first team starts since his move in 2006, both in cup ties.

Roberto commented, “”Tomasz is at a crucial point in his career and he needs to be playing first-team football to help reach his potential. The deal will hopefully give him that valuable experience in a competitive league, at a top side, and be of great benefit to him.”