Barrow back at Latics as Coach 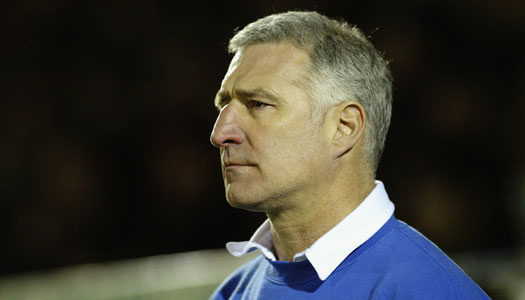 Latics have announced today that club legend Graham Barrow has returned to the Wigan to take on the role of First Team Coach.

Former player and manager Barrow says “it’s a dream come true” to be back at the club where he spent so many happy years. As well as working alongside Roberto Martinez with the first team, he will oversee the development of the club’s young professionals and take charge of the reserve team.

Barrow spent five years at Latics as a player from 1981-86, scoring 44 goals in 212 league and cup games, and developed a reputation as a terrific powerhouse in the centre of midfield. He was part of the Larry Lloyd promotion-winning team of 1982, and the Freight Rover Trophy winning side of 1985.

After a spell away, he returned in perhaps one of the club’s darkest hours, when Latics were stuck at the foot of Division 3, and turned around the team’s fortunes. He was in charge when Dave Whelan took over in February 1995, and signed Roberto Martinez as a player, in the summer of ‘95

They have been close ever since and Martinez has often described Barrow as a father figure. It is ironic that the wheel has now turned full circle and it is Martinez’s turn to appoint Barrow. The 55 year old told the club’s official website: “This club has always been special to me and it really is a dream come true to return here

“It’s feels like a real homecoming and I’m still trying to let it sink in to be honest. I played with some very good players in my time here and I like to think I served the club well as a player. I came back as manager later on and worked with some of the staff who are still here today, and I can see that although a lot has changed at the club, you still get the same warm feeling when you come in.

“I’ve worked with Roberto in the past and he’s a bright lad with lots of ideas who is very unique in what he has to offer to the club. The way he had Swansea playing attractive football and getting results at the same time was magnificent, and if you went to any FA meeting they all spoke of the style of football there in the same breath as some of the bigger teams around the continent.

“Having been a manager myself in the past I know things can be difficult but I feel there is a lot I have to offer to Roberto and Graeme (Jones) in terms of advice. Roberto feels it’s important that the whole group of players at he club should be made to feel together so that’s something we’ll be aiming to do, and obviously progress them along the way.”

Martinez said that Graham Barrow was always a first choice member of his backroom staff: “Graham has not only been a good mentor to me over the last 15 years,” he said, “but a genuine friend, and I have often asked for his advice. But I have not appointed him for sentimental reasons. He has a terrific football brain and it is wonderful to have another true Wigan man on board.”

Do you have a point of view or story you would like published on the Cockney Latic??

We are always looking for new articles to put on the site, whether they are one offs, or if they become a regular feature. If you’re interested, send your details to us and we will get in touch. Or you can send in any pieces you think would go down well on the site. The email as usual is jayt@cockneylatic.co.uk.